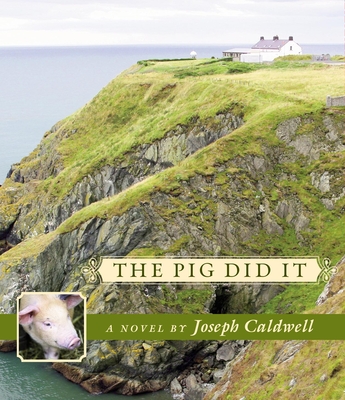 The Pig Did It

A pig escapes from its pen and roots up the garden of Kitty McCloud, a bestselling novelist who “corrects” the classics. What the obstreperous little pig unearths is evidence of a possible transgression that the novel’s three Irish characters—the plagiarizing Kitty, her blood-feud rival Kieran, and a sexy swineherd named Lolly—are convinced the other has probably benefited from.

How this hilarious mystery is resolved inspires both comic eloquence and a theatrically colorful canvas depicting the brooding Irish land and seascape.

Praise For The Pig Did It…

“The macabre comedy plays out in sparkling dialogue, including some hilarious speeches that are both incantations of Irish mythology and masterful bits of parody. . . . [Caldwell’s] perfect ear for the non sequiturs of real conversation is a constant delight.”
—Washington Post (A Book World Best Book of 2008)

“Puts farcical doings into lilting language and provides a payoff that is as unexpected as it is satisfying.”
—Publishers Weekly

“Irish to the core, [Caldwell’s trilogy] speaks to all of humanity . . . with a heart as wide as an Irish smile and a drollness that would be welcome in many a pub.”
—Richmond Times-Dispatch

JOSEPH CALDWELL is a playwright and novelist who has been awarded the Rome Prize for Literature by the American Academy of Arts and Letters. He is the author of five novels in addition to the Pig Trilogy. He began writing the trilogy when he was a volunteer in a hospital during the AIDS epidemic. Realizing his work could get no darker, he had to lighten up. Caldwell lives in New York City.

CHRIS PATTON began his career in stage performance but later found his true calling in voice over.  In addition to his work narrating audiobooks, Chris has also voiced over 160 animated titles, and numerous national and regional commercials.  He has appeared at over seventy-five pop culture conventions internationally to discuss his craft and interact with fans of his expansive fan base.
Loading...
or support indie stores by buying on