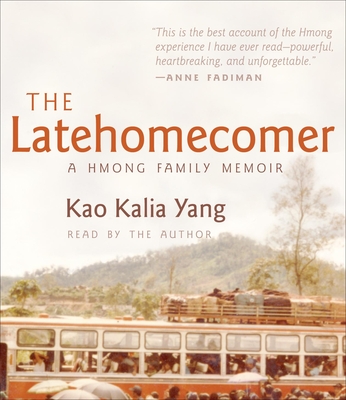 In the 70s and 80s, thousands of Hmong families made the journey from the war-torn jungles of Laos to the overcrowded refugee camps of Thailand and onward to the United States—all in search of a new place to call home. Decades later, their experiences remain largely unknown.

Kao Kalia Yang was driven to tell her own family’s story after her grandmother’s death. The Latehomecomer is a tribute to that grandmother, a remarkable woman whose spirit held her family together through their imprisonment in Laos, their narrow escape into Thailand’s Ban Vinai Refugee Camp, their immigration to St. Paul when Yang was only six years old, and their transition to life in America. It is also an eloquent, firsthand account of a people who have worked hard to make their voices heard in their adopted homeland.

Praise For The Latehomecomer: A Hmong Family Memoir…

“In many ways, these hardworking refugees followed the classic immigrant arc, with the adults working double jobs so the children could get an education and be a credit to the community. But the Hmong immigrants were also unique—coming from a non-Christian, rain forest culture, with no homeland to imagine returning to, with hardly anyone in America knowing anything about them. As Yang wryly notes, they studied the Vietnam War at school, without their lessons ever mentioning that the Hmong had been fighting for the Americans. Yang tells her family’s story with grace; she narrates their struggles, beautifully weaving in Hmong folklore and culture. By the end of this moving, unforgettable book, when Yang describes the death of her beloved grandmother, readers will delight at how intimately they have become part of this formerly strange culture.”
—Publishers Weekly [starrred review]

“Yang recounts the harrowing journey of her family from Laos to a refugee camp in Thailand to the U.S. Eventually settling in St. Paul, Minnesota, their struggle was not over. Adapting to a new community that often did not understand nor want them was difficult. This difficulty was compounded by the fact that the Hmong, despite possessing a rich folkloric tradition, have no written language of their own. Determined to tell the story of both her family and her people, Yang intimately chronicles the immigrant experience from the Hmong perspective, providing a long-overdue contribution to the history and literature of ethnic America.”
—Booklist

“Provides a remarkable account of the Hmong experience in this country . . . in a vivid audio recommended for any general lending collection.”
—California Bookwatch

Born in a Thai refugee camp in 1980, KAO KALIA YANG immigrated to Minnesota when she was six. Together with her sister, she founded Words Wanted, a company dedicated to helping immigrants with writing, translating, and business services. A graduate of Carleton College and Columbia University, Yang has also recently completed a short film on the Hmong American refugee experience.
Loading...
or support indie stores by buying on