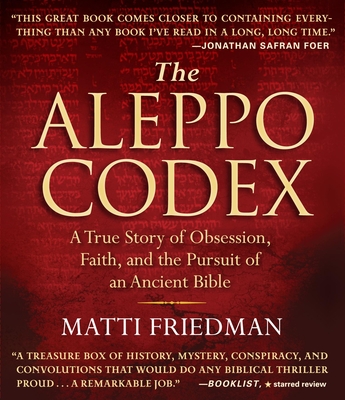 A true-life thriller about the journey of one of the world’s most precious manuscripts—the 10th century annotated Hebrew Bible known as the Aleppo Codex—from its hiding place in an ancient Syrian synagogue to the newly-founded Israel. Using his research, including documents which have been secret for 50 years and interviews with key players, AP correspondent Friedman tells a story of political upheaval, international intrigue, charged courtroom battles, obsession, and subterfuge.

Praise For The Aleppo Codex: A True Story of Obsession, Faith, and the Pursuit of an Ancient Bible…

“Through the Levantine haze and a millennium of safekeeping, a carefully paced narrative of purloined Judaica.”
—Kirkus Reviews

“Friedman has done a remarkable job—finding sources and digging through archives—of getting [this] fascinating story out of the shadows and into the light.”
—Booklist [HC starred review]

“Friedman’s account of how the Codex was taken from Syria in the 1940s, later to resurface in Jerusalem, although no longer complete, is full of betrayals, controversy and surprises—and raises larger questions about the ownership and preservation of historical treasures.”
—Jewish Week

“Friedman’s excellent descriptions set the stage for the stops along the way, and Simon Vance’s smooth British accent puts listeners on the scene. As Friedman’s investigation unfolds, Vance embodies the author’s outrage at ‘the tragedy of human weakness’ responsible for the loss of some of the great work.”
—AudioFile

“A thrilling, step-by-step quest to discover what really happened to Judaism’s most important book.”
—Boston Globe

“Friedman’s clear writing and dogged pursuit of some otherwise overlooked assumptions read more like a detective novel than history. . . . An important account in accessible, gripping prose.”
—The Christian Science Monitor

“Friedman shines as a magnificent and thoughtful storyteller. . . . The Aleppo Codex might be an unintentional thriller but it is a great one nonetheless.”
—Jewish Book World

“Brilliantly read by Simon Vance. His voice lends the whole story an air of gravitas and when combined with Friedman’s descriptions created the perfect combination to make a book about a very old book come to life and become a book about betrayal, danger, intrigue, greed, justice, cover-ups and the survival of a nation.”
—DWD’s Reviews

Matti Friedman’s 2016 book Pumpkinflowers was chosen as a New York Times Notable Book and as one of Amazon’s 10 Best Books of the Year. It was selected as one of the year’s best by Booklist, Mother Jones, Foreign Affairs, the National Post, and the Globe and Mail. It also won the Vine Award in Canada. Matti’s first book, The Aleppo Codex won the 2014 Sami Rohr Prize, the ALA’s Sophie Brody Medal, and the Canadian Jewish Book Award for history and was translated into seven languages. Friedman’s work as a reporter has taken him from Israel to Lebanon, Morocco, Moscow, the Caucasus, and Washington, DC, and his writing has appeared in the Wall Street Journal, the New York Times, The Atlantic, the Washington Post, and elsewhere. A former Associated Press correspondent, Friedman is a regular contributor to Tablet Magazine and the Jewish Review of Books. He grew up in Toronto and now lives with his family in Jerusalem.