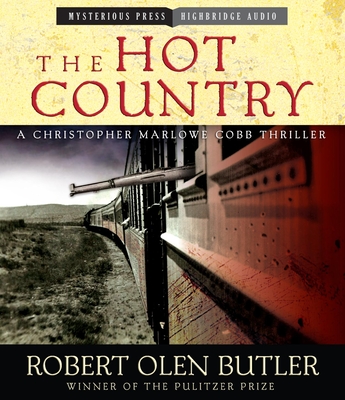 Christopher Marlowe Cobb (“Kit”), the swashbuckling early 20th-century American newspaper war correspondent, travels to Mexico in April and May of 1914, during that country’s civil war and the American invasion of Vera Cruz.

But covering the war in enemy territory and in sweltering heat isn’t enough of a challenge for Cobb. Soon, he’s falling in love with a young Mexican laundress, Luisa, who may not be as innocent as she seems, and he’s witnessing the inexplicable attempted sniper assassination of a priest (miraculously, the bullet rebounds off the cross around his neck, leaving him unharmed). Now Cobb is also trying to track down a sniper—and figure out why important German officials are coming into the city in the middle of the night from ammunition ships docked in the port.

An exciting tale of intrigue and espionage, Butler’s powerful crime-fiction debut is a thriller not to be missed.

Praise For The Hot Country: A Christopher Marlowe Cobb Thriller…

“Enjoyable novel that should attract devotees of espionage and historical fiction.”
—Library Journal

“Excitement and intrigue abound in this choice pick for public library audiobook collections and enthusiasts of mystery and suspense.”
—Wisconsin Bookwatch

ROBERT OLEN BUTLER is the Pulitzer Prize-winning author of numerous novels and short story collections. He has twice won a National Magazine Award in Fiction and has received two Pushcart Prizes. He teaches creative writing at Florida State University.

Voice actor, writer, and musician RAY CHASE has provides the voices for major commercial campaigns such as Coke Zero, and Top Ten iPhone app successes. He began his career by reading aloud in the car for his mother and sister on the way to school. They didn’t seem to mind so much. He hopes you don’t either.