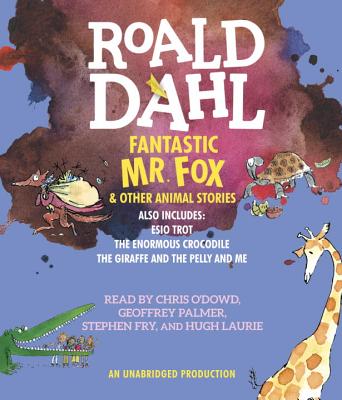 Includes Esio Trot, The Enormous Crocodile & The Giraffe and the Pelly and Me

Someone's been stealing from the three meanest farmers around, and they know the identity of the thief—it's Fantastic Mr. Fox! Working alone they could never catch him; but now fat Boggis, squat Bunce, and skinny Bean have joined forces, and they have Mr. Fox and his family surrounded. What they don't know is that they're not dealing with just any fox—Mr. Fox would rather die than surrender. Only the most fantastic plan can save him now.

An ancient spell, 140 tortoises, and a little bit of magic…

The Enormous Crocodile is a horrid greedy grumptious brute who loves to guzzle up little boys and girls. But the other animals have had enough of his cunning tricks, so they scheme to get the better of this foul fiend, once and for all!


THE GIRAFFE AND THE PELLY AND ME

Who needs a ladder when you’ve got a giraffe with an extended neck?

The Ladderless Window-Cleaning Company certainly doesn't. They don’t need a pail, either, because they have a pelican with a bucket-sized beak. With a monkey to do the washing and Billy as their manager, this business is destined for success. Now they have their big break—a chance to clean all 677 windows of the Hampshire House, owned by the richest man in all of England! That’s exciting enough, but along the way there are surprises and adventures beyond their wildest window-washing dreams.