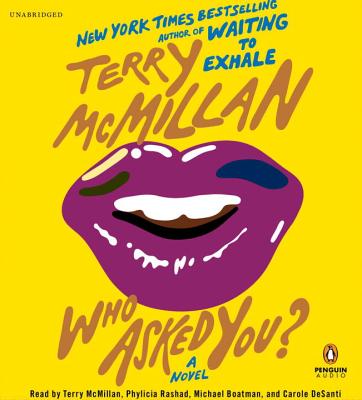 Family ties are tested and transformed in the new novel from #1 "New York Times "bestselling author of "Waiting to Exhale" and "How Stella Got Her Groove Back"
With her wise, wry, and poignant novels of families and friendships "Waiting to Exhale," "Getting to Happy," and "A Day Late and a Dollar Short "among them Terry McMillan has touched millions of readers. Now, in her eighth novel, McMillan gives exuberant voice to characters who reveal how we live now at least as lived in a racially diverse Los Angeles neighborhood.
Kaleidoscopic, fast-paced, and filled with McMillan's inimitable humor, "Who Asked You?" opens as Trinetta leaves her two young sons with her mother, Betty Jean, and promptly disappears. BJ, a trademark McMillan heroine, already has her hands full dealing with her other adult children, two opinionated sisters, an ill husband, and her own postponed dreams all while holding down a job as a hotel maid. Her son Dexter is about to be paroled from prison; Quentin, the family success, can t be bothered to lend a hand; and taking care of two lively grandsons is the last thing BJ thinks she needs. The drama unfolds through the perspectives of a rotating cast of characters, pitch-perfect, each playing a part, and full of surprises.
"Who Asked You?" casts an intimate look at the burdens and blessings of family and speaks to trusting your own judgment even when others don t agree. McMillan's signature voice and unforgettable characters bring universal issues to brilliant, vivid life.

Terry McMillan s debut, "Mama," won the Doubleday New Voices in Fiction and American Book awards. McMillan has been honored by the NEA, the New York Foundation for the Arts, the NAACP, and "Essence." She lives in Los Angeles."
Loading...
or
Not Currently Available for Direct Purchase