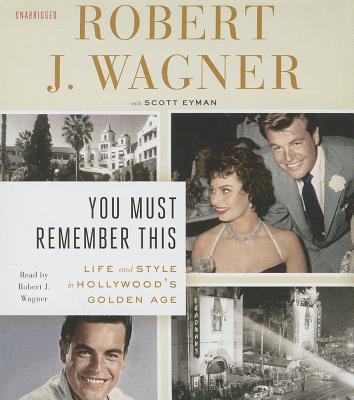 You Must Remember This (Compact Disc)

The legendary actor and bestselling author of "Pieces of My Heart "offers a nostalgic look at Hollywood's golden age
With a career spanning more than five decades, few actors are more qualified to recount the glamorous Hollywood era of the late 1940s and early 1950s than Robert Wagner. "You Must Remember This "is Wagner's ode to a bygone age, to its incomparable style and how it was displayed, and to its legendary stars.
Wagner revisits the houses, restaurants, and other haunts of Hollywood's elite, offering an intimate view of their lives on and off screen. He fondly recounts mythic figures simply entertaining at home among friends, away from the publicity machine and public eye that morphed into today's paparazzi culture. Wagner also discusses the business of Hollywood and its evolution from an industry once dominated by moguls to one run by agents, and examines the career arcs of his peers, carefully considering why some survived and others faded.
Engaging and entertaining, "Y"ou "Must Remember This i"s a window into the splendors of an erstwhile era and an opportunity for readers to live vicariously through one its most beloved leading men.

Robert Wagneris the star of such films as "A Kiss Before Dying," "The Longest Day," "The Pink Panther," and most recently, the Austin Powers franchise. On television, he starred in "It Takes a Thief "(with Fred Astaire), "Switch "(with Eddie Albert and Sharon Gless), and "Hart to Hart "(with Stefanie Powers). He has recently appeared on "Two and a Half Men "and "NCIS." He is married to actress Jill St. John and lives in Aspen, Colorado."
or
Not Currently Available for Direct Purchase
Copyright © 2020 American Booksellers Association