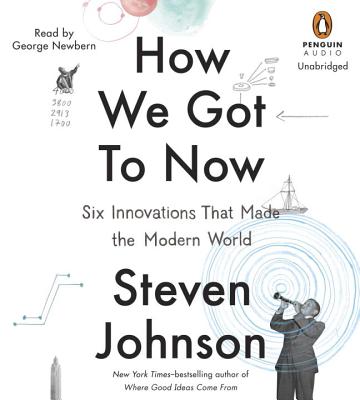 From the New York Times–bestselling author of Where Good Ideas Come From and Everything Bad Is Good for You, a new look at the power and legacy of great ideas.

In this illustrated volume, Steven Johnson explores the history of innovation over centuries, tracing facets of modern life (refrigeration, clocks, and eyeglass lenses, to name a few) from their creation by hobbyists, amateurs, and entrepreneurs to their unintended historical consequences. Filled with surprising stories of accidental genius and brilliant mistakes—from the French publisher who invented the phonograph before Edison but forgot to include playback, to the Hollywood movie star who helped invent the technology behind Wi-Fi and Bluetooth—How We Got to Now investigates the secret history behind the everyday objects of contemporary life.

Praise For How We Got to Now: Six Innovations That Made the Modern World…

Steven Johnson is the author of the bestsellers Where Good Ideas Come From, The Invention of Air, The Ghost Map, Everything Bad Is Good for You, Mind Wide Open, Emergence, and Interface Culture, and is the editor of the anthology The Innovator’s Cookbook. He is the founder of a variety of influential websites and writes for Time, Wired, The New York Times, and The Wall Street Journal. Johnson lives in Marin County, California, with his wife and three sons.
Loading...
or
Not Currently Available for Direct Purchase