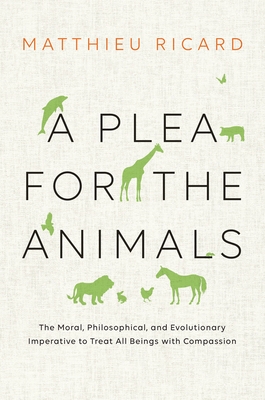 A Plea for the Animals (Paperback)

The Moral, Philosophical, and Evolutionary Imperative to Treat All Beings with Compassion

A powerful and wide-ranging indictment of the treatment of animals by humans--and an eloquent plea for animal rights.

Every cow just wants to be happy. Every chicken just wants to be free. Every bear, dog, or mouse experiences sorrow and feels pain as intensely as any of us humans do. In a compelling appeal to reason and human kindness, Matthieu Ricard here takes the arguments from his best-sellers Altruism and Happiness to their logical conclusion: that compassion toward all beings, including our fellow animals, is a moral obligation and the direction toward which any enlightened society must aspire.  He chronicles the appalling sufferings of the animals we eat, wear, and use for adornment or “entertainment,” and submits every traditional justification for their exploitation to scientific evidence and moral scrutiny.  What arises is an unambiguous and  powerful ethical imperative for treating all of the animals with whom we share this planet with respect and compassion.

Matthieu Ricard received a PhD in molecular genetics from the Pasteur Institute in 1972 before departing his native France to study Buddhism in the Himalayas, eventually becoming a monk of the Shechen Tennyi Dargyeling Monastery in Nepal. Renowned also as a photographer and translator, he is the author of numerous previous books, including Altruism: The Power of Compassion to Change Yourself and Your World,  Happiness: A Guide to Developing Life’s Most Important Skill, and, with his father, the late Jean-François Revel, The Monk and the Philosopher: A Father and Son Discuss the Meaning of Life. He dedicates all the income of his work to two hundred humanitarian projects run in the Himalaya by the organization he founded, Karuna-Shechen.

Praise For A Plea for the Animals: The Moral, Philosophical, and Evolutionary Imperative to Treat All Beings with Compassion…

“Are animals mere things, here for us to exploit? Or are they rather sentient, often intelligent beings, entitled to live their own lives? Matthieu Ricard examines theological, philosophical and scientific thinking on both sides of the issue and concludes that without doubt we must recognize each animal is an individual deserving of our compassion and respect. A Plea for the Animals is fascinating, instructive and compelling, speaking to us on both an intellectual and emotional level.”—Jane Goodall

"A Plea for the Animals continues and completes the wonderful work Matthieu Ricard did in his Altruism, drawing on science and philosophy to show that compassion cannot be limited to members of our own species but must be extended to all beings capable of suffering.  This is a book for everyone who is willing to consider the case for a radical change in the way we treat animals."—Peter Singer, author of Practical Ethics and Animal Liberation

"A Plea for the Animals is an outstanding and well-referenced book that surely will make a difference for the billions of nonhumans who routinely suffer globally at the hands of humans, be it in slaughterhouses, laboratories, or other captive situations, or in what's left of their natural environs. Matthieu Ricard's heartfelt plea for us to tap into our caring and compassionate selves and to treat other animals with unbounded dignity and respect will go a long way toward inspiring people to see other animals for who they truly are, to feel for them deeply, and to recognize how they fully depend on us to grant them the ability to be able to live their lives in peace and safety -- to survive and to thrive in an increasingly human-dominated world. By personally rewilding and understanding what other animals want and need, humans will more easily reconnect and become re-enchanted with other animals so that peaceful coexistence becomes a reality, and it will be a win-win for all concerned."—Marc Bekoff, author of Animals Matter and Rewilding Our Hearts: Building Pathways of Compassion and Coexistence
or support indie stores by buying on
Copyright © 2020 American Booksellers Association