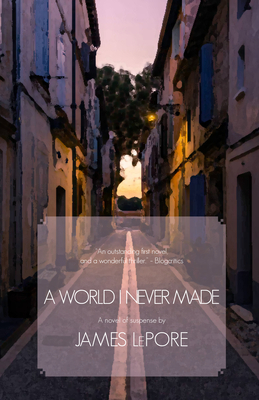 A World I Never Made

Pat Nolan, an American man, is summoned to Paris to claim the body of his estranged daughter Megan, who has committed suicide. The body, however, is not Megan's and it becomes instantly clear to Pat that Megan staged this, that she is in serious trouble, and that she is calling to him for help.This sends Pat on an odyssey that stretches across France and into the Czech Republic and that makes him the target of both the French police and a band of international terrorists. Joining Pat on his search is Catherine Laurence, a beautiful but tormented Paris detective who sees in Pat something she never thought she'd find-genuine passion and desperate need. As they look for Megan, they come closer to each other's souls and discover love when both had long given up on it.Juxtaposed against this story is Megan's story. A freelance journalist, Megan is in Morocco to do research when she meets Abdel Lahani, a Saudi businessman. They begin a torrid affair, a game Megan has played often and well in her adult life. But what she discovers about Lahani puts her in the center of a different kind of game, one with rules she can barely comprehend. Because of her relationship with Lahani, Megan has made some considerable enemies. And she has put the lives of many-maybe even millions-at risk.A WORLD I NEVER MADE is an atmospheric novel of suspense with brilliantly drawn characters and back-stories as compelling as the plot itself. It is the kind of novel that resonates deeply and leaves its traces long after you turn the final page.

Praise For A World I Never Made: The Invictus Cycle Book 1…

“A WORLD I NEVER MADE is an outstanding first novel, and a wonderful thriller. The story moves very quickly, almost to the point that the reader feels as if they'll miss something if they put the book down even for a moment…. I'm looking forward to James LePore's next work; this one was a gripping read that I would recommend to anyone.”
– Blogcritics

“This is a well-paced, intriguing story that weaves a lot of threads together before finally bringing them all back for the somewhat surprising finale. I really enjoyed the locations, the intrigue, and for me, Megan's struggle to extricate herself from a good situation gone bad...”
– The Loud Librarian

“The key to this exciting thriller is the cast especially the Nolan father and daughter. Pat is terrific from the stunning opening sequence when he reads his daughter’s suicide note, his lie re the corpse, which Laurence’s superior Inspector LeGrand accepts though he knows otherwise, and subsequently his inquiry. Megan is mostly seen through his perception of her though the audience learns relatively early why the Saudis believe she is alive…fans will enjoy this one sitting suspense thriller.”
– Harriet Klausner, The Mystery Gazette

“James LePore has written a fascinating suspense story of power and treachery, broken relationships and redemption….I highly recommend this compelling suspense story filled with vivid characters and haunting storylines. A story that will stay with the reader long after the final page.”
– Bella Online

“Nothing could have torn my attention away from this story. A WORLD I NEVER MADE by James LePore is a must read for thriller fans!”
– Cheryl’s Book Nook