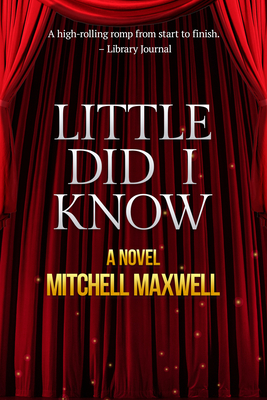 Little Did I Know (Paperback)

Here is the story of an unforgettable summer. Set in Plymouth, MA in the late seventies, LITTLE DID I KNOW is the tale of a young man with an outsized dream to refurbish a dilapidated but historic theater and produce a season's worth of vibrant musicals. A recent college graduate, he fills his cast and crew with people he has come to love and trust in his university life, and with others whose talents and personalities prove undeniable. Yet, while the productions drive his ambitions, a local woman drives his passions, and their romance is fateful, star-crossed, and ultimately more than either of them expected.
Told with wit, compassion, and the kind of insider's access to the theater that only someone like Mitchell Maxwell can provide, LITTLE DID I KNOW is a novel about coming of age in the spotlight and embracing one's entire future in a single season.

Mitchell Maxwell has built five entertainment companies and has owned and operated three off-Broadway theaters. A thirty-five-year veteran of the entertainment industry, he has produced seven Broadway shows, more than thirty off-Broadway and regional productions, four national tours, three West End productions and six major motion pictures. He has directed in New York, London, and regionally. His productions have been nominated for and won almost every theatrical award including the Tony, Pulitzer, Drama Desk, Outer Critics Circle, Obie and Ovation awards.