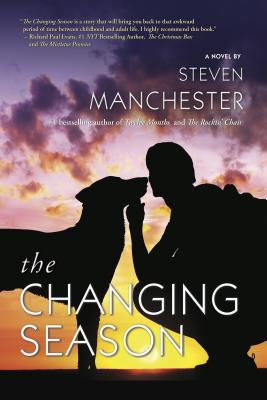 THE CHANGING SEASON is a story that will bring you back to that awkward period of time between childhood and adult life. I highly recommend this book. - Richard Paul Evans, #1 NYT Bestselling Author, THE CHRISTMAS BOX and THE MISTLETOE PROMISE. THE CHANGING SEASON is a thought provoking coming of age tale that explores the complicated themes of love, faith, family, and above all, loyalty. Mr. Manchester's portrayal of a boy at the cusp of manhood is evocative and sympathetic. - Susan Wilson, NYT Bestselling Author, ONE GOOD DOG. This was supposed to be a simple summer for Billy: one more lazy expanse of time before college began. He'd fill the hours playing with Jimmy his canine best buddy going camping and doing all the things he promised Jimmy they'd do before Billy left. But that was before the accident that shook the entire town. It was before the summer job that turned into something so much more than a way to get a paycheck. And it was before Vicki. This summer was destined to be many things to Billy, things he didn t truly understand until now. But it was definitely not going to be simple. An enormously touching, richly textured, deeply moving novel of new adulthood, THE CHANGING SEASON is an experience to savor.

Steven Manchester is the author of the #1 bestsellers Twelve Months, The Rockin' Chair, Pressed Pennies, and Gooseberry Island as well as the novel Goodnight, Brian. His work has appeared on NBC's Today Show, CBS's The Early Show, CNN's American Morning, and BET's Nightly News. Recently, three of Manchester's short stories were selected "101 Best" for the Chicken Soup for the Soul series.
Loading...
or
Not Currently Available for Direct Purchase