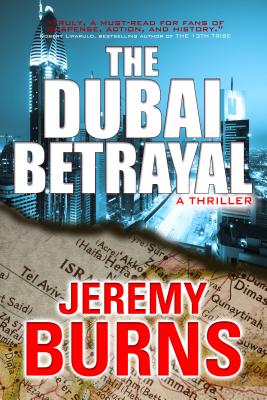 During a desperate attempt to rally support for a controversial Middle Eastern peace summit, U.S. Ambassador Christine Needham is kidnapped on an unauthorized visit to Dubai. Forced to walk a thin line between diplomacy and effectiveness, President James Talquin assembles a new covert team, helmed by black ops veteran Wayne Wilkins, to rescue the ambassador before she is executed by terrorists. But the ambassador is in possession of a dangerous secret, one that, if not recovered in time, could lead to the most devastating terror attack in history.Now Wayne and his team are on a collision course with unseen forces that seem to be manipulating world powers toward a devastating conclusion. With a nuclear apocalypse just hours away, the operatives must confront a new kind of jihad, one that breaks all the rules of warfare and terrorism.But all of the players may not be what they seem, and with no one left to trust, the newly founded team must lean on each other to navigate the glittering heights and hidden depths of one of the world's most fascinating cities and infiltrate a centuries-old shadow war raging within Islam itself. As the twists and betrayals mount, it soon becomes clear that unless Wayne and his men can recover the ambassador and the secret she holds in time, the terrorists' enigmatic paymaster may get exactly what he wants: an all-consuming world war from which America and her allies would never recover. PRAISE FOR JEREMY BURNS' FIRST NOVEL, FROM THE ASHES: "With From the Ashes, Jeremy Burns establishes himself among the best authors of taut, historical thrillers. In this gripping debut, Burns lays bare a fascinating conspiracy of deceit, full of action and twists. You'll find yourself rooting for his heroes, repulsed by his villains, and rethinking what you think you know about one of history's darkest times. Truly, a must-read for fans of suspense, action, and history." - Robert Liparulo, bestselling author of The 13th Tribe, Comes a Horseman, and The Dreamhouse Kings "From the Ashes is a thrilling race against time to expose a diabolical conspiracy that would shatter everything we think we know about the 20th century. With clever puzzles, enigmatic clues, and hidden secrets, Jeremy Burns re-imagines New York's landmarks so vividly that you will want to explore them all over again." - Boyd Morrison, bestselling author of The Ark and The Vault "National Treasure meets The Bourne Identity in this riveting debut. Blending history, suspense, and adventure, Burns takes readers on a nonstop thrill ride through some of the country's most famous sites - and infamous periods of history - ensuring that you'll never look at New York City, the 1930s, or the name 'Rockefeller' the same again. Not to miss "- Jeremy Robinson, bestselling author of Threshhold and Secondworld "A book for fans of Steve Berry and Raymond Khoury, From the Ashes is well-written and impeccably researched with great characters and a conspiracy that is frightening in both its implications and plausibility. Jeremy Burns is an author to watch." - Ethan Cross, international bestselling author of The Shepherd "Jeremy Burns is going to be a force to be reckoned with. I haven't seen writing like this for a long time." - Ryder Islington, author of Ultimate Justice "Jeremy Burns is a true espionage writer who knows when to ramp up the action and when to insert some provocative description in a well-balanced tapestry of historical, adventure-packed fiction. Well done, indeed, Jeremy Burns " - Crystal Book Reviews.

Jeremy Burns is a former educator and journalist who holds degrees in History and Computer Science. He taught literature, political science, creative writing, and philosophy at an international school in Dubai, and has traveled to more than twenty countries across four continents. When not exploring a new corner of the globe, he is hard at work uncovering long-buried secrets, devising sinister conspiracies, and plotting globe-trotting adventures for his upcoming books.
Loading...
or
Not Currently Available for Direct Purchase