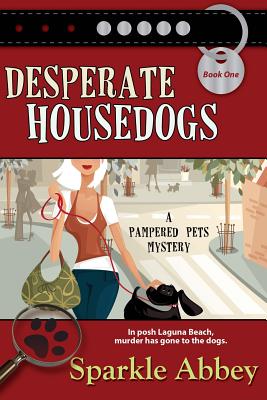 In posh Laguna Beach, murder has gone to the dogs.

When Caro Lamont, former psychologist turned pet therapist makes a house call to help Kevin Blackstone with his two misbehaving German Shepherd dogs, she expects frantic dogs, she expects a frantic dog owner, she even expects frantic neighbors. What she doesn't expect is that two hours later the police will find Kevin dead, his dogs impounded; and that as the last person to see Kevin alive (well, except for the killer) she is suddenly a person of interest, at least according to Homicide Detective Judd Malone.

Detective Judd Malone scanned my living room, his baby blues taking in my overstuffed couch, easy chairs and crowded bookshelves. My cats, Thelma and Louise, perched in the window sill, replete with tuna. Each opened an eye and then, unimpressed, went back to their beauty sleep. Dogbert climbed from his doggie bed, trotted over for a sniff, but then also dismissed Malone and went back to his nap.
"Can I get you something to drink?" I asked. Some hospitality is automatic. Even when you have an unannounced guest. Even a guest who might arrest you.
He shook his head and continued his scan.
"Well, then. What can I help you with, Detective?"
"I understand you visited Kevin Blackstone today?"
"Yes, I did. I'm the behavioral counselor for his German shepherds. What about Kevin?"
I had a really bad feeling about this. Malone arched a brow. "Kevin Blackstone is dead."

Sparkle Abbey is the pseudonym of two mystery authors (Mary Lee Woods and Anita Carter). They are friends and neighbors as well as co-writers of the Pampered Pets Mystery Series. The pen name was created by combining the names of their rescue pets - Sparkle (Mary Lee's cat) and Abbey (Anita's dog). They reside in central Iowa, but if they could write anywhere, you would find them on the beach with their laptops and depending on the time of day either an iced tea or a margarita.)