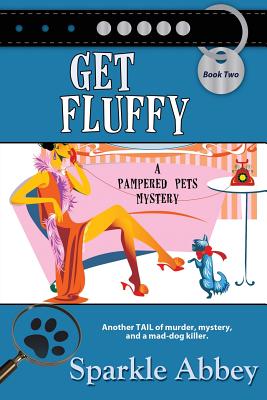 Disgraced Texas beauty queen, Melinda (Mel) Langston, owns Laguna Beach's Bow Wow Boutique. Mona Michaels, Mel's most despised client, owns a star dog, Fluffy, who's worth millions. When Mona is found whacked in the head with Fluffy's Daytime Emmy, everyone wants Fluffy, but someone won't stop at murder to get the pooch.

Secrets. Blackmail. Mel tackles the case like a dog with a bone. But can she dig up the truth before the killer buries her?

I stumbled through the doorway into a mini-palace fit for a movie star. Fluffy's palace. A white sheepskin rug in front of her personal fireplace, a king-sized sleigh bed and a dressing screen (why a dog needed a dressing screen was beyond me). Fresh, filtered water dripped into her Wedgewood doggie bowl.
The room looked like it had been ransacked.
Mona was sprawled on the floor as if posing for a men's magazine. It was almost picture-perfect, except for the blood matting her five-hundred-dollar haircut and the gold statue stuck in her head.
I hesitantly moved closer. Fluffy nuzzled Mona's cheek. When she didn't move, Fluffy pawed her shoulder, still whining.
"I don't think she's getting up, girl," I said softly.
Mona was deader than a stuffed Poodle.

Sparkle Abbey is the writing team of Anita Carter and Mary Lee Woods. Visit the authors at http: //sparkleabbey.com.