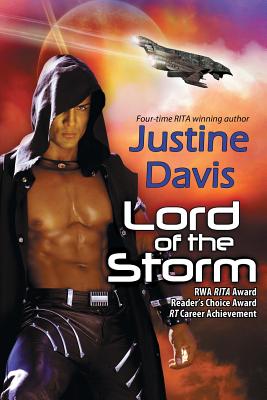 Lord of the Storm

Her every wish is his command. He lives only to serve her desires.
A warrior. A sex slave from a conquered world.
What will he do to her if she sets him free?
Shaylah Graymist, ace fighter pilot for a brutal intergalactic Coalition, is given a slave as a reward for heroism in battle. The incredibly virile slave named Wolf wears a collar which controls him completely, allowing her to make him do anything she wants. Yet Shaylah has an old-fashioned belief in love and refuses to take advantage of him. A tense friendship grows between her and Wolf, along with deep desires he refuses to admit. The Coalition destroyed his people. He won't betray their memory.
When Shaylah returns to battle, Wolf rebels and is sold to a prison colony. She frees him, and together they journey to his home planet. As she learns more about Wolf, she begins to question her loyalty to the Coalition, and the passions between them burn out of control.