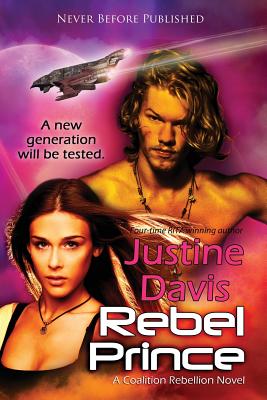 Romantic Times 200 BEST BOOKS OF ALL TIME
The long-awaited series finale.
The Coalition has not given up on the jewel that is Trios, and this time they are determined not to conquer, but destroy.
A new generation will be tested.
Lyon-the son of a legendary Trios king.
Shaina-the daughter of an infamous skypirate.
Rina-a survivor haunted by the losses of the first rebellion.
Prince Lyon would rather strip naked in the square than allow Shaina Silverbrake bragging rights for rescuing him from anything, much less would be prince-nappers on Arellia. But what he wants and what destiny has planned for him are about to collide when a dark plot is uncovered by Rina. Lyon's last adventure before royal duty claims him for life becomes a race for a powerful artifact, and the fate of two worlds hangs in the balance.
Author of more than sixty books (she sold her first ten in less than two years), Justine Dare Davis is a four-time winner of the coveted RWA RITA Award, and has been inducted into the RWA Hall of Fame. Her books have appeared on national bestseller lists, including USA Today. She has been featured on CNN and taught at several national and international conferences and at the UCLA writer's program. Find out more at her website and blog at justinedavis.com, Facebook at JustineDareDavis, or Twitter @Justine_D_Davis.