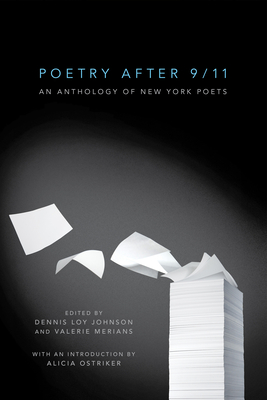 An Anthology of New York Poets

This important and inspiring collection is a sweeping overview of poetry written in New York in the year after the 9/11 attacks . . .

This anthology contains poems by forty-five of the most important poets of the day, as well as some of the literary world’s most dynamic young voices, all writing in New York City in the year immediately following the World Trade Center attacks.

It was inspired by the editors' observation that after the tragic events of September 11th, 2001, poetry was being posted everywhere in New York—on telephone poles, on warehouse walls, on bus shelters, in the letters-to-the-editor section of newspapers ... New Yorkers spontaneously turned to poetry to understand and cope with the tragedy of the attack. Full of humor, love, rage and fear, this diverse collection of poems attests to that power of poetry to express and to heal the human spirit.

Praise For Poetry After 9/11: An Anthology of New York Poets…

“There was something more to be said that only poetry could say. It is eloquently said here."
—Publishers Weekly

"After last year's tragic attack on the World Trade Center, Americans turned to poetry both to find expressions for their grief and to assuage it. Not surprisingly, poets themselves turned to the blank page (or computer screen) to sum up the nation's sense of loss. Some of the best efforts are captured in this fine anthology....An excellent addition to most collections."
—Library Journal

"An impressive roster of poets...."
—Newsday

"Noteworthy for the high quality of its poems...."
—Chicago Tribune

"...an acknowledgement of [poetry's] ability to express the unfathomable."
—Seattle Times

"....an intriguing alternative to the many where-were-you accounts of the day that are flooding stores."
—Rocky Mountain News

"[The] poems in the book distill emotions, add to our record of images both real and imagined."
—Orlando Sentinel

Dennis Loy Johnson and Valerie Merians are the founders of Melville House. They began the publishing house with this book.

Alicia Ostriker, twice nominated for a National Book Award, is a renowned poet and author of twelve volumes of poetry, most recently The Book of Seventy.
Loading...
or
Not Currently Available for Direct Purchase