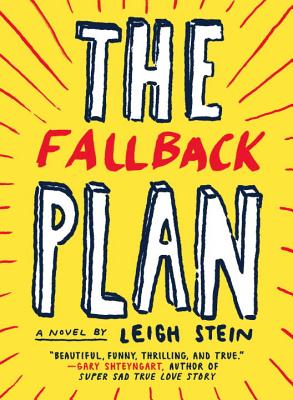 What to do when you’ve just graduated from college and your plans conflict with those of your parents? That is, when your plans to hang out on the couch, re-read your favorite children’s books, and take old prescription tranquilizers, conflict with your parents plans that you, well, get a job?

Without a fallback plan, Eshter Kohler decides she has no choice but to take the job her mother has lined up for her: babysitting for their neighbors, the Browns.

It’s a tricky job, though. Six months earlier, the Browns’ youngest child died. Still, as Esther finds herself falling in love with their surviving daughter May, and distracted by a confusing romance with one of her friends, she doesn’t notice quite how tricky the job is … until she finds herself assuming the role of confidante to May’s mother Amy, and partner in crime to Amy’s husband Nate. Trapped in conflicting roles doomed to collide, Esther is forced to come up with a better idea of who she really is.

Both hilarious and heartbreaking, The Fallback Plan is a beautifully written and moving story of what we must leave behind, and what we manage to hold on to, as we navigate the treacherous terrain between youth and adulthood.

Praise For The Fallback Plan…

"This book has a universal quality, capturing a generation's angst quite like Franny and Zooey did when it was published in 1961."—Chicago Tribune

"The Fallback Plan is to this generation what Rick Moody’s The Ice Storm was to the previous generation, and The Catcher in the Rye before that."—Susan Salter Reynolds, Los Angeles Review of Books

"Stein’s wry voice shines through... her self-aware take on the self-pitying recession-grad generation is compelling reading." —The Millions

"Stein, 26, captures the voice of the young 20-something prodigal daughter with the clarion call of authenticity in her debut novel. ... Stein’s light, accessible, self-deprecating prose makes this coming-of-age story a pleasure."—Publishers Weekly

"Stein's fluid style is peppered with wryness and pop-culture references...[she] seems poised to become the Lena Dunham of contemporary fiction."—ELLE

"Readers will endorse Esther Kohler’s voice as being not only funny, but also true. It echoes long after her story ends, and “The Fallback Plan’’ is a novel everyone under 30 will relate to with familiar pangs of self-loathing and sympathy."—Boston Globe

"An existential crisis of lost 20-somethings that pretty much everyone can relate to."—NYLON

“Intimate, urgent, and laugh-out-loud funny, Leigh Stein's novel bravely investigates the splendor and tragedy of the end of youth with a sensitivity and lyrical deftness that will not disappoint. Think Franny and Zooey. Think Goodbye, Columbus. Think of this book as your next great read.”—Joe Meno (Hairstyles of the Damned, The Great Perhaps)

"[A] fantastic book whose charm and warmth beg for a second read-through."—InDigest Magazine

" The Fallback Plan has got it all: Sex, love, drugs, death, infidelity and one very confused post-grad."—College Magazine

This is Leigh Stein’s first novel, although at 26 she is already an accomplished writer. A former New Yorker staffer and frequent contributor to its “Book Bench” blog, her poetry has been published in numerous journals, been nominated for a Pushcart Prize, and earned her Poets & Writers Magazine’s Amy Award. She lives in Brooklyn, where she works in children’s publishing and teaches musical theater to elementary school students.
Loading...
or
Not Currently Available for Direct Purchase