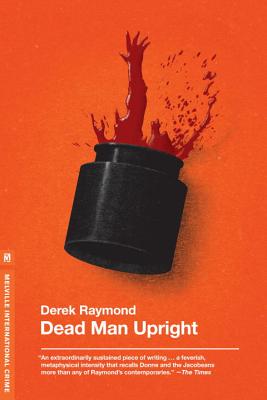 Never before available in the U.S., the final episode in the Factory Series is another unrelenting investigation with the nameless detective into the black soul of Thatcher’s England.

The fifth and final book in the author’s acclaimed Factory Series was published just after Derek Raymond’s death, and so didn’t get the kind of adulatory attention the previous four titles in the series got. The book has been unavailable for so long that many of Derek Raymond’s rabid fans aren’t even aware there is a fifth book.

But Dead Man Upright may be the most psychologically probing book in the series. Unlike the others, it’s not so much an investigation into the identity of a killer, but a chase to catch him before he kills again. Meanwhile, the series’ hero—the nameless Sargent from the “Unexplained Deaths” department—is facing more obstacles in the department, due to severe budget cutbacks, than he’s ever faced before.

However, this time, the Sargent knows the identity of the next victim of the serial killer in question. But even the Sargent’s brutally blunt way of speaking can’t convince the besotted victim, and he’s got to convince a colleague to go against orders and join him in the attempt to catch the killer... before it’s too late.

"Unrelenting existentialist noir—as if the most brutal of crime fictions had been recast by Sartre, Camus, or Ionesco while retaining something of the intimate wise-guy tone of Raymond Chandler and Dashiell Hammett."
—Joyce Carol Oates, The New York Review of Books

"It’s one of the darkest and most surrealistically hard-boiled things I’ve ever read. The detective is at least as scary as the murderers he’s chasing."
—William Gibson, bestselling author of Neuromancer

"No one claiming interest in literature truly written from the edge of human experience, no one wondering at the limits of the crime novel and of literature itself, can overlook these extraordinary books."
—James Sallis, author of Drive

"The Factory novels are certainly the most viscerally imagined of their kind that I've ever read, or reread multiple times.  Derek Raymond wrote in a supposedly escapist genre in a manner that precluded any hope of escape."
—Scott Phillips, bestselling author of The Ice Harvest

"There remains no finer writing – crime or otherwise – about the state of Britain."
—David Peace, author of "The Red Riding Quartet."

"Carve Derek Raymond’s name into the literary pantheon. He is one of the rare authors who seek to understand evil, ferret out the darkness in human nature, and blast Noir fiction out of the genre ghetto and into Literature. His nameless detective's quest through the bleak streets gets under your skin. Amazing, painful and brilliant."
—Cara Black, bestselling author of Murder at the Lanterne Rouge

"I Was Dora Suarez blew me away - beyond hard boiled."
—Patton Oswalt

"More Chandleresque than Chandler... [Raymond] could write beautifully...and, more importantly, what he is writing about in this novel are nothing less than the important subjects any writer can deal with: mortality and death."
—Will Self

"Pungently evokes the British underworld. As forceful as ever." —Publishers Weekly

"For fans of Raymond’s dark and compelling mystery fiction, this one is a must-read."
—Booklist

Derek Raymond was the pseudonym of Robert Cook, born in London in 1931. The son of a textile magnate, he dropped out of Eton and rejected a life of privilege for a life of underworld adventure, which included working for London’s notorious Kray Brothers’ crime syndicate. His writing about that world culminated in the five Factory novels now seen as landmarks in British fiction: He Died with His Eyes Open, The Devil’s Home on Leave, How the Dead Live, I Was Dora Suarez, and Dead Man Upright.
Loading...
or
Not Currently Available for Direct Purchase