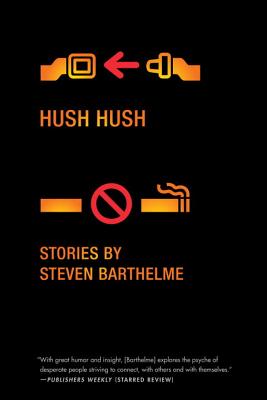 If you're up $16,000 at the casino and missing dinner with the woman you love, how do you find the strength to drive away? If you give up your career and your beautiful wife and find yourself drinking vodka and fixing cars for a living, is that necessarily a step down? In Hush Hush, Steven Barthelme gives us a simultaneously twisted, heartbreaking, and hilarious account of learning to quit when you're ahead.

The collection, which includes the Pushcart Prize-winning "Claire," exposes the surprising dignity in lying on your belly in the pouring rain, in ringing your ex-girlfriend's doorbell at 4 A.M., in sleeping with your dead wife's best friend. Co-author with his brother Frederick of the brilliant and devastating casino memoir, Double Down: Reflections on Gambling and Loss, Steven Barthelme seems to cast an eye at his own history and the characters he's known. These are men and women who are down --- but stirringly, not quite out. An unmissable, arresting book from one of the most seminal short story writers of the last twenty years.

"With great humor and insight, he explores the psyche of desperate people striving to connect, with others and with themselves." —Publishers Weekly (starred review)

"Barthelme has a sure voice and a respect for the narrative arc as it reveals itself. These stories are relatively short, but they always end at just the right place." —Library Journal

"Steven Barthelme’s new collection of short stories plays like the best of saddest love songs ... Hush Hush more than deserves its own place on the mantle of celebrated contemporary short fiction collections." —The Rumpus

"Poignant ... this is one of the few noteworthy short story collections that we've come across this year." —The Huffington Post

"There is a pragmatic eloquence to Steven Barthelme’s writing, in the way his characters explain their decisions and their failures to live up to their potential.... it's often beautiful and profound."
—Los Angeles Review

STEVEN BARTHELME was born in 1947 in Houston, the son of the celebrated architect Donald Barthelme Sr. He is the author of the story collection And He Tells the Little Horse the Whole Story and the co-author, with his brother Frederick, of Double Down: Reflections on Gambling and Loss. A collection of essays and occasional pieces titled The Early Posthumous Work appeared in 2010. He is the director of the Center for Writers at the University of Southern Mississippi, where he is also a Professor of English. His writing has appeared in publications including The New York Times Magazine, The Atlantic Monthly, Yale Review, McSweeney’s, and the Pushcart Prize annual.
Loading...
or
Not Currently Available for Direct Purchase