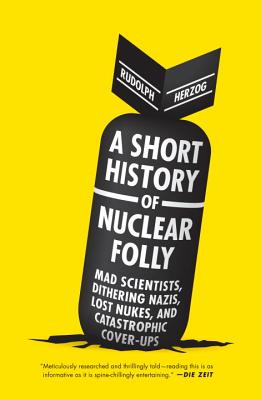 In the spirit of Dr. Strangelove and The Atomic Café, a blackly sardonic people’s history of atomic blunders and near-misses revealing the hushed-up and forgotten episodes in which the great powers gambled with catastrophe

Rudolph Herzog, the acclaimed author of Dead Funny, presents a devastating account of history’s most irresponsible uses of nuclear technology. From the rarely-discussed nightmare of “Broken Arrows” (40 nuclear weapons lost during the Cold War) to “Operation Plowshare” (a proposal to use nuclear bombs for large engineering projects, such as a the construction of a second Panama Canal using 300 H-Bombs), Herzog focuses in on long-forgotten nuclear projects that nearly led to disaster.

In an unprecedented people’s history, Herzog digs deep into archives, interviews nuclear scientists, and collects dozens of rare photos. He explores the “accidental” drop of a Nagasaki-type bomb on a train conductor’s home, the implanting of plutonium into patients’ hearts, and the invention of wild tactical nukes, including weapons designed to kill enemy astronauts.

Told in a riveting narrative voice, Herzog—the son of filmmaker Werner Herzog—also draws on childhood memories of the final period of the Cold War in Germany, the country once seen as the nuclear battleground for NATO and the Warsaw Pact countries, and discusses evidence that Nazi scientists knew how to make atomic weaponry . . . and chose not to.

Rudolph Herzog is the author of Dead Funny: Humor in Hitler’s Germany. His documentary on humor in the Third Reich, Laughing with Hitler, scored top audience ratings on German Channel 1 and was also broadcast on the BBC. He is the son of the celebrated filmmaker Werner Herzog. A documentary by Rudolph Herzog based on A Short History of Nuclear Folly was released in 2014. He is currently filming How to Sell a War.

Jefferson Chase is one of the foremost translators of German history. He has translated Wolfgang Schivelbusch, Thomas Mann, and Götz Aly, among many other writers.

Praise for A Short History of Nuclear Folly

“Unflinching . . . Herzog’s use of the word ‘folly’ is an under­statement.”
—The Village Voice

“It is arguably not possible to imagine human stupidity on a grander scale than what Rudolph Herzog has stockpiled in his new book.”
—The Brooklyn Rail

“A well-written, if tragic, account of how little nuclear weapons testers knew or were willing to account for.”
—Vice

“Amusing . . . interesting and occasionally eye-popping.”
—Survival (The Journal of the International Institute for Strategic Studies)

“Herzog’s study is a shocking and vitally important reminder that we live in an unsteady nuclear age.”
—Publishers Weekly

“Looks at the seriocomic side of the history of nuclear experimentation after WWII . . . Alternately funny and scary but overall mostly scary, the book reminds us just how frightening the Cold War really was.”
—Booklist

“Darkly funny low points in our nuclear past as well . . . more of-the-moment prognostications of what we can expect from our nuclear neighbors.”
—Toronto Star

“For a book about such a heavy subject, A Short History of Nuclear Folly, keeps it quick and snappy and, dare I say, entertaining.”
—Philadelphia Review of Books

“An eclectic, innovative approach to the bureaucratization of creativity during the Cold War.”
—The Los Angeles Review of Books

“Meticulously researched and thrillingly told—reading this is as informative as it is spine-chillingly entertaining.”
—Die Zeit

“Rudolph Herzog’s collection of the most incredible stories reads as a tour through the most polluted places on the globe.”
—Frankfurter Rundschau

“Herzog, the son of the film-maker Werner Herzog, shares his father’s curious and mordant wit.” —The Financial Times

“Dead Funny isn’t just a book of wildly off-limits humor. Rather, it’s a fascinating, heartbreaking look at power dynamics, propaganda, and the human hunger for catharsis.”
—The Atlantic, Best Books of 2012
or
Not Currently Available for Direct Purchase
Copyright © 2020 American Booksellers Association