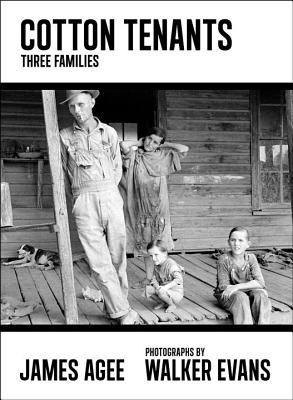 In 1941, James Agee and Walker Evans published Let Us Now Praise Famous Men, a four-hundred-page prose symphony about three tenant farming families in Hale County, Alabama at the height of the Great Depression. The book shattered journalistic and literary conventions. Critic Lionel Trilling called it the “most realistic and most important moral effort of our American generation.”

The origins of Agee and Evan's famous collaboration date back to an assignment for Fortune magazine, which sent them to Alabama in the summer of 1936 to report a story that was never published. Some have assumed that Fortune's editors shelved the story because of the unconventional style that marked Let Us Now Praise Famous Men, and for years the original report was lost.

But fifty years after Agee’s death, a trove of his manuscripts turned out to include a typescript labeled “Cotton Tenants.” Once examined, the pages made it clear that Agee had in fact written a masterly, 30,000-word report for Fortune.

Published here for the first time, and accompanied by thirty of Walker Evans’s historic photos, Cotton Tenants is an eloquent report of three families struggling through desperate times. Indeed, Agee’s dispatch remains relevant as one of the most honest explorations of poverty in America ever attempted and as a foundational document of long-form reporting. As the novelist Adam Haslett writes in an introduction, it is “a poet’s brief for the prosecution of economic and social injustice.”

Co-Published with The Baffler magazine

"A masterpiece of the magazine reporter’s art. It is lucid, evocative, empathetic, deeply reported, consistently surprising, plainly argued, and illuminated, page after page, with poetic leaps of transcendent clarity.”—FORTUNE

"Agee squabbled with his editors over what he felt was the exploitation and trivialization of destitute American families…. What readers are about to discover now is what all the fighting was about.” —THE NEW YORK TIMES

”Cotton Tenants reads with the spare and measured beauty of a writer who knows that under the social circumstances he can only allow himself so much. It is a deeply moving work…Cotton Tenants is fresh and painful reading.” —THE AWL

"That’s the first thing to be said about this essay: Fortune was crazy not to run it. It was a failure of nerve, and a lost chance at running one of the great magazine pieces from that era.”—John Jeremiah Sullivan, BOOKFORUM

"An all-in, embracive rendering, panoramic as Brueghel while typecasting like Ben Shahn . . . Agee may be our foundational maximalist, the progenitor of Norman Mailer, Thomas Pynchon, and David Foster Wallace.”—THE LOS ANGELES REVIEW OF BOOKS

"A paragon of lyrical realism, the book is a legend. . .Agee writes with clinical, angry precision.” —THE BOSTON GLOBE

"Agee’s discerning eye, crushing bluntness, and forward-falling prose poetry urge along before dunking readers’ senses, again and again, into the families’ way of life. Disdainful of sentiment and melodrama, Agee shows no bias, revealing his subjects and skewering both oppressors and supposed reformers.” —BOOKLIST

“A book of wonders—an untamable American classic in the same line as Leaves of Grass and Moby-Dick.” —David Denby, THE NEW YORKER

“Let Us Now Praise Famous Men is . . . a classic work, an exercise in pure, declarative humanism. It will read true forever.” —David Simon, creator of The Wire

“The most copiously talented writer of my generation.” —Dwight Macdonald

“The most realistic and most important moral effort of our American generation.” —Lionel Trilling

JAMES AGEE (1909–55) was born in Knoxville, Tennessee, and was hired as a staff writer at Fortune in 1932. Two years later, his collection of poetry, Permit Me Voyage, won the Yale Series of Younger Poets competition. His book about Alabama tenant farmers during the Great Depression, Let Us Now Praise Famous Men, appeared in 1941. Agee was later renowned for his film criticism, which appeared regularly in The Nation and Time, and for co-writing the screenplays for The African Queen and The Night of the Hunter. He died two years before his major work of fiction, A Death in the Family, was published and won the Pulitzer Prize.

Photographer WALKER EVANS (1903–75) was on loan from the Resettlement Administration when he began collaborating with James Agee. He joined the staff of Time in 1945 and shortly afterward became an editor at Fortune, where he stayed for the next two decades. In 1964, he became a professor at the Yale University School of Art, teaching until his death in 1975.

ADAM HASLETT (introduction) is the author of Union Atlantic and You Are Not a Stranger Here.

JOHN SUMMERS (editor) is the editor in chief of The Baffler.
or
Not Currently Available for Direct Purchase