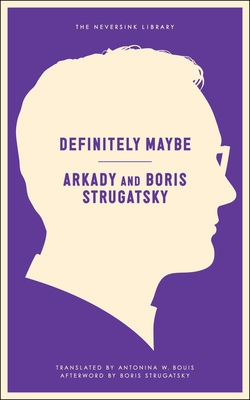 In its first-ever unexpurgated edition, a sci-fi landmark that's a comic and suspenseful tour-de-force, and puts distraction in a whole new light: It's not you, it's the universe!

Boris and Arkady Strugatsky were the greatest science fiction writers of the Soviet era: their books were intellectually provocative and riotously funny, full of boldly imagined scenarios and veiled—but clear—social criticism. Which may be why Definitely Maybe has never before been available in an uncensored edition, let alone in English.

It tells the story of astrophysicist Dmitri Malianov, who has sent his wife and son off to her mother’s house in Odessa so that he can work, free from distractions, on the project he’s sure will win him the Nobel Prize.

But he’d have an easier time making progress if he wasn’t being interrupted all the time: First, it’s the unexpected delivery of a crate of vodka and caviar. Then a beautiful young woman in an unnervingly short skirt shows up at his door. Then several of his friends—also scientists—drop by, saying they all felt they were on the verge of a major discovery when they got . . . distracted . . .
Is there an ominous force that doesn’t want knowledge to progress? Or could it be something more . . . natural?

In this nail-bitingly suspenseful book, the Strugatsky brothers bravely and brilliantly question authority: an authority that starts with crates of vodka, but has lightning bolts in store for humans who refuse to be cowed.

“Definitely Maybe, further proof that knowledge can be a dangerous game, is a work of towering wit and intelligence."
—NPR, Best Books of 2014

“A great truth is this: Some discoveries, like the sting of a painful memory, do a number on your psyche. Definitely Maybe accomplishes just that… You’ll laugh, you’ll look around suspiciously, you’ll throw the text across the room. You’ll pick it back up and go on, gladly welcoming the distraction.”
—NPR

“Their protagonists are often caught up in adventures not unlike those of pulp-fiction heroes, but the story line typically veers off in unpredictable directions, and the intellectual puzzles that animate the plots are rarely resolved. Their writing has an untidiness that is finally provocative; they open windows in the mind and then fail to close them all, so that, putting down one of their books, you feel a cold breeze still lifting the hairs on the back of your neck.”
—The New York Times