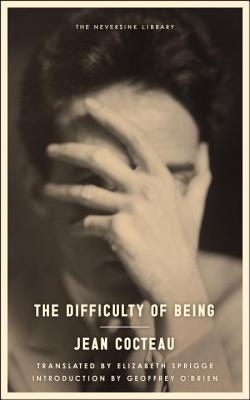 The Difficulty of Being (Neversink) (Paperback)

Reflections on life and art from the legendary filmmaker-novelist-poet-genius.

By the time he published The Difficulty of Being in 1947, Jean Cocteau had produced some of the most respected films and literature of the twentieth century, and had worked with the foremost artists of his time, including Proust, Gide, Picasso and Stravinsky.

This memoir tells the inside account of those achievements and of his glittering social circle. Cocteau writes about his childhood, about his development as an artist, and the peculiarity of the artist’s life, about his dreams, friendships, pain, and laughter. He probes his motivations and explains his philosophies, giving intimate details in soaring prose. And sprinkled throughout are anecdotes about the elite and historic people he associated with.

Beyond illuminating a truly remarkable life, The Difficulty of Being is an inspiring homage to the belief that art matters.

JEAN COCTEAU (1889–1963) was a novelist, poet, filmmaker, artist and playwright. Born in a village just outside of Paris, he left home at fifteen and published his first volume of poetry, Aladdin’s Lamp, at nineteen. He circulated in the highest ranks of bohemian Paris, and counted Picasso and Proust among his close friends. His most famous works include the novel Les Enfants terribles and the films Beauty and the Beast and Orpheus. He was openly gay and at one time an opium addict. He died of a heart attack after being informed of the death of his friend, the singer Edith Piaf.

GEOFFREY O'BRIEN is the Editor-in-Chief of the Library of America. His essays and criticism have been collected in Stolen Glimpses, Captive Shadows: Writing on Film, 2002-2012 and other volumes.

Praise For The Difficulty of Being (Neversink)…

“A man to whom every great line of poetry was a sunrise, every sunset the foundation of the Heavenly City” – Edith Wharton

“One of the master craftsmen.” – Tennessee Williams

“He left his mark on an entire era.” – New York Times

“To enclose the collected works of Cocteau one would need not a bookshelf, but a warehouse...” – W.H. Auden

“[Cocteau] had, and still has, a huge influence on the avant-garde of American film.” – The Guardian
or
Not Currently Available for Direct Purchase
Copyright © 2020 American Booksellers Association