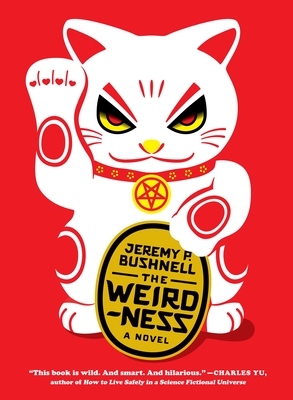 “If the Devil wanted to make a deal with you but it was because he really wasn't such a bad guy and he needed help saving the planet, would you agree? If you're aspiring novelist Billy Ridgeway, of course you would. It's only Lucifer. What could possibly go wrong? Bushnell does a hilariously great job constructing a contemporary tale of moral and spiritual dilemmas, and also expertly describes the ego and nuances of a struggling writer - a whole other kind of demon!”
— Liberty Hardy, RiverRun Bookstore, Portsmouth, NH
View the List

An “utterly charming, silly, and heartily entertaining” literary urban fantasy about a floundering aspiring writer who makes a deal with the Devil (Boston Globe)

What do you do when you wake up hung over and late for work only to find a stranger on your couch? And what if that stranger turns out to be an Adversarial Manifestation—like Satan, say—who has brewed you a fresh cup of fair-trade coffee? And what if he offers you your life’s goal of making the bestseller list if only you find his missing Lucky Cat and, you know, sign over your soul?

If you’re Billy Ridgeway, you take the coffee.

Praise For The Weirdness: A Novel…

Best Book Cover of 2014, Book Riot
One of the Must-Read Books from Indie Presses in 2014, RiverRun Bookstore

“An utterly charming, silly, and heartily entertaining coming-of-age story about a man-boy who learns to believe in himself by reckoning with evil… a welcome antidote to heavy-handed millennial fiction. Instead of trying to find profundity in party conversation or making his readers shudder in melancholy recognition of their thwarted lives, The Weirdness finds virtue in absurdity. Thank goodness — or darkness — for that.”
—Boston Globe

“Arriving as a practitioner of such supernatural humor, loaded with brio, wit, and sophisticated jollity, like the literary godchild of Max Barry, Christopher Moore, and Will Self,  comes Jeremy Bushnell… An engaging reading experience.”
—Paul Di Filippo, Barnes & Noble Review

“In many ways, this is an illuminating parable for these times… you’ll just wish you had more of this delightful novel still left to read.”
—San Francisco Bay Guardian

“A whimsical approach… an aspiring author in New York who wakes one day to find that Satan has just brewed him a cup of fair-trade coffee — and has a little deal to discuss.”
—Tampa Bay Times

“[The Weirdness] is immensely entertaining, and more than being merely diverting, is truly funny.”
—Harvard Crimson

“The novel is truly a ’weird’ read, though unforgettable… An open-minded, modern reader will fully appreciate this bizarre and unusual work of fiction, the author’s first novel.”
—Fairfield Mirror

One of “the week’s most exciting books”
—Book Riot

“Absolutely, positively one of the most original takes on the nearing middle age, suffering male writer bit… Bushnell manages to turn this story on its head in what should be the most ridiculous novel you’ve ever read.”
—The Picky Girl

“A comedic literary thriller situated between the world of Harry Potter and the Brooklyn of Jonathan Ames, Bushnell’s debut effectively mines well-trodden terrain to unearth some dark gems.”
—Publishers Weekly

“The Weirdness manages to soar beyond the potentially familiar tropes of urban fantasy with a strong sense of style and character… Bushnell’s debut novel is a clever, darkly satiric tale of the devil, literary Brooklyn and the human penchant for underachievement.”
—Shelf Awareness

“This book is wild. And smart. And hilarious. And weird … in all kinds of good ways. Prepare to be weirded out. And to enjoy it.”
—Charles Yu, author of How to Live Safely in a Science Fictional Universe

“Jeremy Bushnell has written an irreverent, chaotic, comically inventive novel that makes New York City look like the insane asylum some suspect it is. It steadfastly refuses to bore you, and by the end has something important to say about the way we dream.”
—William Giraldi, author of Busy Monsters

JEREMY BUSHNELL is the fiction editor for Longform.org, and is also the lead developer of Inevitable, a tabletop game released by Dystopian Holdings. He teaches writing at Northeastern University in Boston, and he lives in Dedham, Massachusetts. This is his first novel.
Loading...
or
Not Currently Available for Direct Purchase