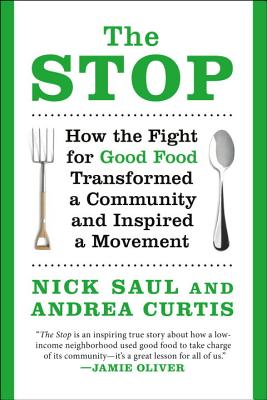 British super chef Jamie Oliver called it "amazing," writing that he'd traveled all over the world and never seen anything like it. New York Times food writer Mark Bittman called it "one of those forward-thinking groups pointing the way to the future of good food." Raj Patel, the critically acclaimed author of Stuffed and Starved, said he was "blown away" by it.

So what is it? The Stop, a Community Food Centre that has revolutionized the way we combat hunger and poverty.

Since community worker Nick Saul became the executive director of The Stop in 1998, it has been transformed from a cramped food bank to a thriving, internationally respected Community Food Centre. The Stop has flourished with gardens, kitchens, a greenhouse, farmers' markets and a mission to revolutionize our food system. In a voice that's "never preachy" (MacLean's), Saul and Curtis share what The Stop could mean for the future of food, and argue that everyone deserves a dignified, healthy place at the table.

NICK SAUL was executive director of The Stop Community Food Centre in Toronto from 1998 to 2012 and is a recipient of the prestigious Jane Jacobs Prize and the Queen’s Jubilee Medal. He is now president and CEO of Community Food Centres Canada, an organization that will bring the innovations of The Stop to communities across the country. www.cfccanada.ca

ANDREA CURTIS is an award-winning writer and editor. Her family memoir, Into the Blue: Family Secrets and the Search for a Great Lakes Shipwreck, won the the Edna Staebler Award for Creative Non-Fiction. Curtis's first children’s book is What’s for Lunch? How Schoolchildren Eat Around the World. www.andreacurtis.ca

Praise For The Stop: How the Fight for Good Food Transformed a Community and Inspired a Movement…

“The Stop is an inspiring true story about how a low-income neighborhood used good food to take charge of its community—it’s a great lesson for all of us.”
—Jamie Oliver

"The Stop is one of those forward-thinking groups pointing the way to the future of good food.”
—MARK BITTMAN

“The riveting inside story of a food bank that through perseverance and principle turned itself into one of our most visionary movements for justice and equality.”
—NAOMI KLEIN, author of The Shock Doctrine and No Logo

“In clear and honest prose, [Saul and Curtis] share their struggles and hope with plain talk through tough decisions. How better to learn about ending hunger than through the story of a former food bank whose aim was to put itself out of business?”
—RAJ PATEL, author of Stuffed and Starved

“This is an important book. The Stop is no ordinary account of the substantial benefits of soup kitchens to servers and served. It is an impassioned account of how to create food systems that foster independence and eliminate the indignities of charity. Saul and Curtis put a human face on poverty. If you want to know what today’s food movement is really about—and why it is anything but elitist—read this book.”
—MARION NESTLE, Professor of Nutrition, Food Studies, and Public Health at New York University and author of What to Eat

“The Stop reads like a compelling novel…but it’s all real. This book enables readers to join the frontier of true democracy, where we hear the voices, smell the aromas, and feel the stories of people creating communities of mutuality. Food becomes the ‘uniter’ of cultures and generations—where each of us feels respect and has voice. Read it and see possibilities for yourself and our world that maybe you’ve never seen before.”
—Frances Moore Lappé, author of EcoMind and Diet for a Small Planet
or
Not Currently Available for Direct Purchase
Copyright © 2020 American Booksellers Association