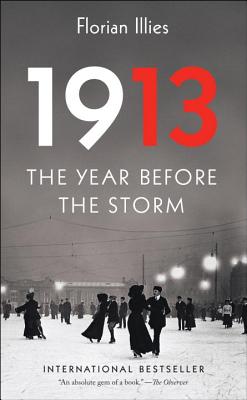 The Year Before the Storm

An International Bestseller "An absolute gem of a book." --The Observer Just before one of its darkest moments came the twentieth century's most exciting year . . .

It was the year Henry Ford first put a conveyer belt in his car factory, and the year Louis Armstrong first picked up a trumpet. It was the year Charlie Chaplin signed his first movie contract, and Coco Chanel and Prada opened their first dress shops. It was the year Proust began his opus, Stravinsky wrote The Rite of Spring, and the first Armory Show in New York introduced the world to Picasso and the world of abstract art. It was the year the recreational drug now known as ecstasy was invented. It was 1913, the year before the world plunged into the catastrophic darkness of World War I. In a witty yet moving narrative that progresses month by month through the year, and is interspersed with numerous photos and documentary artifacts (such as Kafka's love letters), Florian Illies ignores the conventions of the stodgy tome so common in "one year" histories. Forefronting cultural matters as much as politics, he delivers a charming and riveting tale of a world full of hope and unlimited possibility, peopled with amazing characters and radical politics, bristling with new art and new technology . . . even as ominous storm clouds began to gather.

Florian Illies is a German journalist who has worked for major European newspapers and magazines and cofounded the art magazine Monopol. He is the author of four previous bestselling books, which have sold more than 1 million copies. 1913 is his first book to be translated into English. Shaun Whiteside's translations include Nietzsche's The Birth of Tragedy and Robert Musil's The Confusions of Young Torless. Jamie Lee Searle's recent translations include works by Ursula Poznanski, Frank Schatzing, and Dora Heldt.

"An utterly delicious treat or an ideal present for anyone even mildly interested in 20th-century art, music and literature....a sexy, comic and occasionally heartbreaking soap opera.... an irresistible book, excellently translated and packed with factoids and surprising encounters."
—Michael Dirda, The Washington Post

"Illies’s stylish evocation of 1913 is thrilling entertainment for those who have heard it all before but wish to experience—one more time, perhaps—the bleary-eyed ecstasy that is the result of staying up all night reading a book in one sitting."
—The Weekly Standard

“The rich range of subjects, the vibrancy of the writing, here translated by Whiteside and Searle, and the intimate details of the biographies all make this a fast-paced and engrossing read… Highly recommended.”
—Library Journal, STARRED REVIEW

“Already an international bestseller, German author Florian Illies’s 1913: The Year Before the Storm is an absolute gem of a book. His snapshot approach to the year, recorded month by month, is the most original historical account I’ve come across . . . Illies’ genius turn of phrase, beautifully retained by Shaun Whiteside and Jamie Lee Searle’s elegant translation, can be found throughout . . . The entries read like history’s footnotes, but as anyone who’s read Freud knows, the footnotes always tell the best story.” —Lucy Scholes, The Observer

“An entertaining and illuminating study.” —Shirley Whiteside, The Independent

“A hugely enjoyable idiosyncratic month-by-month narrative, in which the frenzy of artistic activity in London, Paris, Vienna, Berlin, and Trieste is conveyed with vigour and humour.” —Juliet Nicolson, The Daily Telegraph

“A vivid, richly textured book that chronicles a world crackling with talent, energy and foreboding. The pace and scale of activity is at times breathtaking . . . Illies’ talent is to weave all this together in a way that keeps the reader with him.” —The Financial Times

“This highly entertaining month-by-month account of 1913 . . . is rich in detail, humour and vivid pen portraits . . . 1913 is the best possible holiday read—or gift—as it is so enjoyable, yet the breadth of information and astute insight will prevent one feeling guilty of indulgence.” —Eileen Battersby, The Irish Times

“Illies is as astute a researcher as he is an observer of the zeitgeist . . . Reads like something out of a magic realist novel.” —The Guardian

“Illies shapes his material not as a scholar, but as a wordsmith, as a story-teller with a strong sense for dramatic effect and composition . . . The most enjoyable book I’ve read in years.” —Die Welt