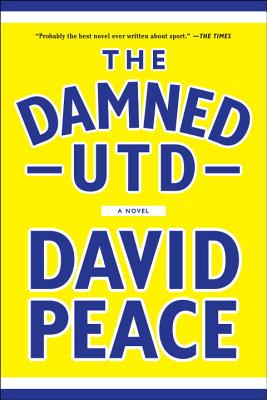 “Probably the best novel ever written about sport.” —The Times (UK)

He was a real-life, working-class hero known as the “British Muhammad Ali”—because he had a big mouth and wasn’t afraid to use it.

But Brian Clough wasn’t a boxer, he was a soccer coach, known for taking backwater teams and making them into champions. In towns where people had little else, the hard-drinking and scrappy Clough was a hero. He was especially beloved for telling it like it was on behalf of small-town teams everywhere—calling out the stars who played dirty, rival coaches he suspected of bribing referees, and the league that let them get away with it.

And then one day Clough was offered a job coaching the big-city team he’d called the dirtiest—the perennial powerhouse Leeds United.

The Damned Utd tells the story of the legendary Clough’s tumultuous forty-four days trying to turn around a corrupt institution without being corrupted himself—the players who wouldn’t play, the management that looked the other way, the wife and friends who stood by him as he fought to do the right thing.

The inspiring story behind the movie of the same name, The Damned Utd has been called by The Times of London, “The best novel ever written about sport.”

Praise For The Damned Utd: A Novel…

"The greatest novel on English football."
—The Millions

"If there's one sports novel you should read, it's probably The Damned Utd . . . a meticulous, if fictional, reconstruction of a crucial period in the career of one of European soccer's most brilliant and fascinating figures . . . one of the most insightful portrayals ever put to print of the insecurity, pride, and vanity that make up the greater part of nearly any successful coach's character."
—Deadspin

“Probably the best novel ever written about sport.”
—The Times (UK)

“The Damned Utd isn’t good, it’s brilliant. Vivid . . . compelling . . . as the reader, you are swept along. It is quite an achievement.”
—The Scotsman

“The most extraordinary novel about football yet to appear.”
—Independent on Sunday

“The book that brought the legend back to life.”
—The Observer

"Shakespearean in its scale, ambition, depth and elements of tragedy, farce and betrayal."
—Independent

"Now this, young man, is what you call an exceptional . . . book, as bold, brilliant and unconventional as Brian Clough himself, whose voice is vividly brought back to life . . . It is a great story grippingly revived."
—The Times (Books of the Year)

David Peace – named in 2003 as one of Granta’s Best of Young Novelists – is the acclaimed author of the Red Riding Quartet (1974, 1977, 1980, and 1983), which was adapted into a BBC television series that was released theatrically in the United States, and is currently being adapted into a major motion picture directed by Ridley Scott. Peace is also the author of the highly praised Tokyo Trilogy, which so far includes Tokyo Year Zero and Occupied City. His book GB84 was awarded the James Tait Black Memorial Prize, and The Damned Utd was called “probably the best novel ever written about sport” by The Times (UK). His newest book, Red or Dead, was shortlisted for the UK’s prestigious Goldsmith’s Prize.
or
Not Currently Available for Direct Purchase