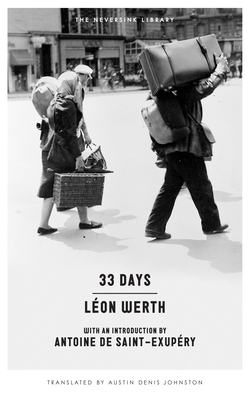 A rare eyewitness account by an important author of fleeing the Nazis’ march on Paris in 1940, featuring a never-before-published introduction by Antoine de Saint-Exupéry.

In June of 1940, Leon Werth and his wife fled Paris before the advancing Nazis Army. 33 Days is his eyewitness account of that experience, one of the largest civilian dispacements in history.

Encouraged to write 33 Days by his dear friend, Antoine de Saint-Exupéry, author of The Little Prince, Werth finished the manuscript while in hiding in the Jura mountains.

Saint-Exupéry smuggled the manuscript out of Nazi-occupied France, wrote an introduction to the work and arranged for its publication in the United States by Brentanos. But the publication never came to pass, and Werth’s manuscript would disappear for more than fifty years until the first French edition, in 1992. It has since become required reading in French schools.

This, the first-ever English language translation of 33 Days, includes Saint-Exupéry’s original introduction for the book, long thought to be lost. It is presented it here for the first time in any language. After more than seventy years, 33 Days appears—complete and as it was fully intended.

Praise For 33 Days: A Memoir (Neversink)…

“The riveting 33 Days, now in its first English translation, proves that the author was no mere footnote."
—New York Magazine

“[Werth is] a sharp-eyed witness to the chaotic exodus… The reunion was worth waiting for.”
—The Atlantic

“A searing chronicle of France’s 1940 exodus...A publishing event in its own right; and almost certainly the best eye witness account of l’Exode."
—Nick Lezard, The Guardian (UK)

“Genius... Lyrical yet brutally descriptive... The real suspense here is in the tension between the absolutely trivial and the absolutely terrible—a tension powerful enough to sustain the entirety of this important memoir."
—Jewish Book Council

“33 Days, admirably translated by Austin Denis Johnston, is a beautifully written portrait not just of the shock of sudden occupation, but an eloquent essay on the meaning of how to remain human, even in the face of such confusing adversity."
—Times Literary Supplement (UK)

“Riveting...masterful... Werth’s short book – fast-paced, engaging and philosophical all at once – offers an astonishingly honest and perceptive expression of life under occupation."
—PopMatters, 9 out of 10 stars

“With its gentle prose, the narrator’s constant questioning and occasional humour, 33 Days is a valuable record of the those fleeing Paris and a subtle yet fierce inquiry as to what it means to be occupied."
—3:AM Magazine

“With nothing to steady oneself in this moment of complete upheaval, at least the reader has Werth’s intellectual honesty, precision of observation, and sensitivity to particularity… This is the skill of a writer...that can, in unusual circumstances, turn an author into a necessary interpreter of an increasingly unfathomable world."
—Cleaver

“Extraordinary... An invaluable document of history as well as a riveting literary narrative."
—Kirkus Reviews

LÉON WERTH (1878-1955) was a novelist, biographer, art critic, journalist, memoirist and political commentator. He was the author of more than 30 works and was a finalist for the Goncourt Prize.

ANTOINE DE SAINT-EXUPÉRY (1900-1944), the “Winged Poet,” was born in Lyon, France, in 1900. A pilot at twenty-six, he was a pioneer of commercial aviation and flew in the Spanish Civil War and World War II. His writings include The Little Prince, Wind, Sand and Stars, Night Flight, Southern Mail, and Airman’s Odyssey. In 1944, while flying a reconnaissance mission for his French air squadron, he disappeared over the Mediterranean.
Loading...
or
Not Currently Available for Direct Purchase