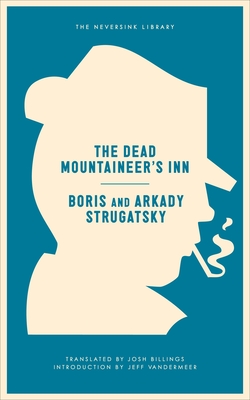 One More Last Rite for the Detective Genre (Neversink)

A hilarious spoof on the classic country-house murder mystery, from the Russian masters of sci-fi—never before translated

When Inspector Peter Glebsky arrives at the remote ski chalet on vacation, the last thing he intends to do is get involved in any police work. He’s there to ski, drink brandy, and loaf around in blissful solitude.

But he hadn’t counted on the other vacationers, an eccentric bunch including a famous hypnotist, a physicist with a penchant for gymnastic feats, a sulky teenager of indeterminate gender, and the mysterious Mr. and Mrs. Moses. And as the chalet fills up, strange things start happening—things that seem to indicate the presence of another, unseen guest. Is there a ghost on the premises? A prankster? Something more sinister? And then an avalanche blocks the mountain pass, and they’re stuck.

Which is just about when they find the corpse. Meaning that Glebksy’s vacation is over and he’s embarked on the most unusual investigation he’s ever been involved with. In fact, the further he looks into it, the more Glebsky realizes that the victim may not even be human.

In this late novel from the legendary Russian sci-fi duo—here in its first-ever English translation—the Strugatskys gleefully upend the plot of many a Hercule Poirot mystery—and the result is much funnier, and much stranger, than anything Agatha Christie ever wrote.

Praise For The Dead Mountaineer's Inn: One More Last Rite for the Detective Genre (Neversink)…

“If Russian sci-fi can be said to have a soul, it resides with the Brothers Strugatsky... Delightful, and a must-read for a new generation of sci-fi fans everywhere."
—NPR

“This is the Strugatskys at their best, at once silly and dead serious... It’s a ripping good yarn, which translator Josh Billings has rendered with great energy and wit."
—Los Angeles Review of Books

“Does for science-fiction/detective hybridization what Hard to Be a God has done for sci-fi/fantasy."
—Flavorwire

“Anything but run-of-the-mill...an entertaining if bizarre success."
—Complete Review

“There’s plenty of humor to be found in this novel, and the way that the plot gradually expands is intricate and constantly entertaining."
—Electric Literature


"Radiant...Beginning as a classic locked-room murder mystery, the novel morphs into a tale of the supernatural (maybe), then into a gangster thriller, and finally into something deeply strange...A tour de force."—World Literature Today

“Definitely Maybe, further proof that knowledge can be a dangerous game, is a work of towering wit and intelligence.”
—NPR, Best Books of 2014

“A great truth is this: Some discoveries, like the sting of a painful memory, do a number on your psyche. Definitely Maybe accomplishes just that . . . You’ll laugh, you’ll look around suspiciously, you’ll throw the text across the room. You’ll pick it back up and go on, gladly welcoming the distraction.”
—NPR

“Their protagonists are often caught up in adventures not unlike those of pulp-fiction heroes, but the story line typically veers off in unpredictable directions, and the intellectual puzzles that animate the plots are rarely resolved. Their writing has an untidiness that is finally provocative; they open windows in the mind and then fail to close them all, so that, putting down one of their books, you feel a cold breeze still lifting the hairs on the back of your neck.”
—The New York Times

JOSH BILLINGS is a writer and translator who lives in Rockland, Maine. His translations of Alexander Pushkin’s Tales of Belkin and Alexander Kuprin’s The Duel have been published by Melville House. His recent writing has appeared in The Collagist and The Literary Review. He blogs at begborrowstijl.blogspot.com.
Loading...
or
Not Currently Available for Direct Purchase