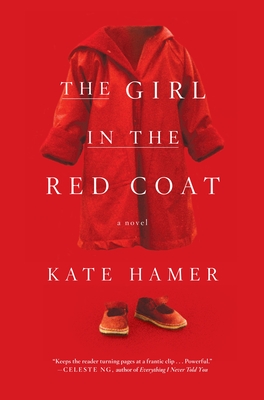 The Girl in the Red Coat

Newly single mom Beth has one constant, gnawing worry: that her dreamy eight-year-old daughter, Carmel, who has a tendency to wander off, will one day go missing.

And then one day, it happens: On a Saturday morning thick with fog, Beth takes Carmel to a local outdoor festival, they get separated in the crowd, and Carmel is gone.

Shattered, Beth sets herself on the grim and lonely mission to find her daughter, keeping on relentlessly even as the authorities tell her that Carmel may be gone for good.

Carmel, meanwhile, is on a strange and harrowing journey of her own—to a totally unexpected place that requires her to live by her wits, while trying desperately to keep in her head, at all times, a vision of her mother …

Alternating between Beth’s story and Carmel’s, and written in gripping prose that won’t let go, The Girl in the Red Coat—like Emma Donoghue’s Room and M. L. Stedman’s The Light Between Oceans—is an utterly immersive story that’s impossible to put down . . . and impossible to forget.

"Kate Hamer’s gripping debut novel immediately recalls the explosion of similarly titled books and movies, from Stieg Larsson’s The Girl With the Dragon Tattoo and its sequels, to The Girl on the Train to Gone Girl … "—Michiko Kakutani, The New York Times

“Keeps the reader turning pages at a frantic clip... What’s most powerful here is not whodunnit, or even why, but how this mother and daughter bear their separation, and the stories they tell themselves to help endure it.” —Celeste Ng (Everything I Never Told You)

“Compulsively readable...Beautifully written and unpredictable, I had to stop myself racing to the end to find out what happened.” —Rosamund Lupton (Sister)

“Both gripping and sensitive — beautifully written, it is a compulsive, aching story full of loss and redemption.” —Lisa Ballantyne (The Guilty One)

"Hamer’s dark tale of the lost and found is nearly impossible to put down.” —Booklist

Praise For The Girl in the Red Coat…

“Kate Hamer’s gripping debut novel immediately recalls the explosion of similarly titled books and movies, from Stieg Larsson’s The Girl With the Dragon Tattoo and its sequels, to The Girl on the Train to Gone Girl … What kicks The Girl in the Red Coat out of the loop of familiarity is Ms. Hamer’s keen understanding of her two central characters: Carmel and her devastated mother, Beth, who narrate alternating chapters … Both emerge as individuals depicted with sympathy but also with unsparing emotional precision.” —Michiko Kakutani, The New York Times

“This stunning debut...has the propulsion of a thriller.” —People

“Every sentence in Kate Hamer's debut is so perceptive that you're torn between wanting to linger on the thought and itching to learn what happens next...The taut plot alternates between Carmel's emotional struggle to survive and Beth's refusal to believe that her daughter is gone forever. Meanwhile, their complex yet unbreakable bond is rendered with honesty and love.”—Oprah.com

“Keeps the reader turning pages at a frantic clip . . . What’s most powerful here is not whodunit, or even why, but how this mother and daughter bear their separation, and the stories they tell themselves to help endure it.” —Celeste Ng, author of Everything I Never Told You

“Hamer’s book is a moving, voice-driven narrative. As much an examination of loss and anxiety as it is a gripping page-turner, it’ll appeal to anyone captivated by child narrators or analyses of the pains and joys of motherhood.” —Huffington Post

“Riveting. Worth the hype.”—Book Riot

“Compulsively readable . . . Beautifully written and unpredictable . . . I had to stop myself racing to the end to find out what happened . . . Kate Hamer catches at the threads of what parents fear most—the abduction of a child—and weaves a disturbing and original story. There is menace in this book, lurking in the shadows on every page, but also innocence, love, and hope.” —Rosamund Lupton, author of Sisters

“Gripping and sensitive—beautifully written, The Girl in the Red Coat is a compulsive, aching story full of loss and redemption.” —Lisa Ballantyne, author of The Guilty One

“[A] spectacular debut … Telling the story in two remarkable voices, with Beth’s chapters unfurling in past tense and Carmel’s in present tense, the author weaves a page-turning narrative. The trajectories of the novel’s two leads—through despair, hope, and redemption—are believable and nuanced, resulting in a morally complex, haunting read.” —Publishers Weekly, starred review

“Reading this novel is a test of how fast you can turn pages.” —Library Journal, starred review

“Hamer’s lush use of language easily conjures fairy-tale imagery, especially of dark forests and Little Red Riding Hood. Although a kidnapped child is the central plot point, this is not a mystery but a novel of deep inquiry and intense emotions. Hamer’s dark tale of the lost and found is nearly impossible to put down and will spark much discussion.” —Booklist, starred review

KATE HAMER is a winner of the Rhys Davies Short Story Prize. Her first novel, Girl in the Red Coat was shortlisted for the Costa Book Award for First Novel and was a finalist for The Dagger Award. Her second novel, The Doll Funeral was described by the Guardian as evoking both Jeanette Winterson and Ian McEwan. She lives in Cardiff, Wales with her husband and two children. She can be found online at katehamer.co.uk

In the beginning of the novel, Beth briefly loses Carmel in a maze. What is the significance of this moment? How did it influence your reaction to the scenes at the festival?

Beth tells Carmel that, regardless of what happens, Carmel must stay uniquely “Carmel” inside. Are names an important aspect of this story? Can you think of any examples where names play a significant role in the text?

Families, or, more importantly, family difficulties, are central to The Girl in the Red Coat. What are the various family dynamics at work? Where are there parallels and where are there inconsistencies?

Discuss Beth and her ex-husband’s shifting relationship. Consider how it is strengthened and changed by Carmel’s disappearance. As Beth says, “we were brother and sister united in this strange bond.”

Early in the book, Carmel’s teacher, Mrs. Buckfast, refers to Beth as “yet another single mother.” Think about the friendships Beth has with her female friends and how they support each other. Are those relationships surprising in any way? How do they evolve?

Fairy tales play an important role throughout The Girl in the Red Coat. Discuss the fairy tale imagery (the woods, the significance of Carmel’s red coat) and how it elevates the novel into the realm of the supernatural. Did this affect your reading of the story?

How does Beth handle the loss of her daughter over the course of the novel? Did you notice examples of “tiny actions” that helped her cope? How do those actions compare to the more major developments in Carmel’s disappearance?

Gramps believes Carmel possesses a divine gift. Do you see evidence of this divine gift throughout the text? Are you convinced by it? Look closely at pages 225–227.

Gramps and Dorothy tell Carmel a number of lies in order to keep her with them. These lies escalate as Carmel becomes more and more suspicious. What are some of these lies and how do they affect Carmel? Is there one that feels like the breaking point, or is it more a matter of accumulation?

The word “courage” is a refrain throughout the novel. Discuss the ways in which the book’s protagonists—Carmel and Beth—display courage. How do those demonstrations compare to the “courage” we see in Gramps, Dorothy, and Paul?

Beth says she feels “better in an environment that says: normality is paper thin.” How does the world move on as Beth struggles with her grief? Did you notice historical or cultural clues that gave you a sense of when the narrative takes place? Did it matter? Look closely at pg. 247.