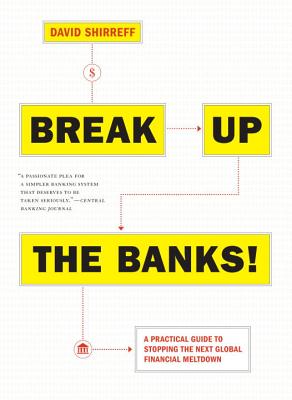 Break Up the Banks! (Paperback)

A Practical Guide to Stopping the Next Global Financial Meltdown

Can we prevent another financial crisis? We can! Break Up the Banks! is a sensible, actionable, and totally accessible call to arms from an acclaimed financial journalist

It’s been eight years since the financial crisis, but has anyone taken real action to prevent the next one? Former Economist reporter David Shirreff thinks not, and in Break Up the Banks!, he gives us a short but essential guide to what exactly we can do. With great clarity and a keen sense of humor, Shirreff argues that banks have gotten far too big and far too powerful—and shows how they can be reined in.

DAVID SHIRREFF has been reporting on finance since the early 1980s. In 1987 he co-founded Risk magazine. From 2001 to 2014, he worked for the Economist in London, Frankfurt, and Berlin reporting on many aspects of business, finance, and the European monetary union. He is the author of Dealing with Financial Risk, in the Economist’s series of business books.

Praise For Break Up the Banks!: A Practical Guide to Stopping the Next Global Financial Meltdown…

“A coherent and enjoyable read . . . Shirreff calls for ‘a revolution to reduce complexity in global banks, to split them into manageable chunks, and to change the self-serving nature of the culture that dominates them.’ To popularize this Shirreff has admirably taken the complexity out of the subject matter . . . [Shirreff] will get us once again focused upon necessary reforms to achieve sensible, if not existentially vital, financial regulation.” —Naked Capitalism

“A passionate plea for a simpler banking system that deserves  to be taken seriously.” —Central Banking Journal


“David Shirreff argues cogently for the split of the banks into manageable chunks.” —The Times (London)
or
Not Currently Available for Direct Purchase
Copyright © 2020 American Booksellers Association