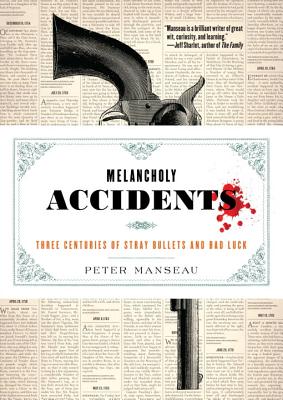 Did you know that fatal gun mishaps have been so common in America that for centuries, newspapers carried regular columns reporting on “melancholy accidents”?

It came as a surprising discovery when, while conducting research that involved reading colonial-era newspapers, acclaimed writer Peter Manseau stumbled upon one report after another of “melancholy accidents”—instances of local people accidentally discharging firearms to disastrous results.

Usually, they were brief items, with the concision of dark poetry—hunting accidents, neighbor shooting neighbor, father shooting son. Dark as they were, they were also often bizarre and fascinating—such as the case of one farmer who, trying out his new musket, shot it at his barn, hitting a door hinge that split the musket ball in two, with each half ricochetting off to hit a different, distant person, each of whom was a doctor.

In Melancholy Accidents, Manseau collects and annotates a wide-ranging assortment of these woebegone and oddly intimate reports, with numerous illustrations, photos, and visuals from original period newspapers. It makes for a wholly unique contribution to the ongoing consideration of—and the recent heated discussion about—the historic place of firearms in American society.

“This is the deal that guns rights advocates have made with the Devil: in exchange for unfettered access, they have abandoned a moral universe in favor of nihilism. What Manseau’s Melancholy Accidents reveals above all is that while we may call ourselves a nation under God, the god we worship first and foremost is Fate.”—The New Republic

"An impressionistic narrative that shows not only the history of gun use and misuse in the United States, but also the way people have processed and commented on the deadly unintended consequences of gun ownership." —Slate

"Like something from the mind of Edward Gorey... the collection would be grimly funny if each of these anecdotes didn’t involve real friends, spouses and children getting shot... A macabre parade of blasted bodies and ruined lives." —The Washington Post

"Darkly comic... As Peter Manseau makes clear, even before the Revolution we were already a nation accustomed to accidentally shooting ourselves and each other."—The Boston Globe

Praise for One Nation, Under Gods

“Manseau is a brilliant writer of great wit, curiosity, and learning.” —Jeff Sharlet

“One Nation, Under Gods is a refreshing, compelling, and surprising reexamination of our nation’s history that puts lie to the oft-quoted idea that America was founded as ‘a Christian nation.’” —Reza Aslan

“With tales of secret faiths, false tolerance and quiet yet formidable dissent, each chapter is a window onto lives that were lived on the margin of Christian narratives . . . [A] lively, refreshing account.” —The New York Times Book Review

“One of those too-rare works of innovative history that also manage to be works of literary art. Its series of interlocking stories, rich in color and depth, combine to offer a new picture of America, both past and present.” —Adam Goodheart

PETER MANSEAU is a fellow at the Smithsonian. He is the author of Rag and Bone, Songs for the Butcher's Daughter, Vows, and One Nation, Under Gods. He is the winner of the National Jewish Book Award, the American Library Association's Sophie Brody Medal for Outstanding Achievement in Jewish Literature, the Ribalow Prize for Fiction, and a 2012 National Endowment for the Arts Literature Fellowship, and he has also been shortlisted for the Center for Fiction's First Novel Prize and the Prix Médicis étranger, awarded to the best foreign novel published in France. He is a founding editor of Killing the Buddha, and he lives in Annapolis, Maryland.
Loading...
or
Not Currently Available for Direct Purchase