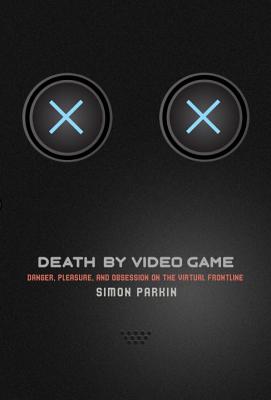 Danger, Pleasure, and Obsession on the Virtual Frontline

"The finest book on video games yet. Simon Parkin thinks like a critic, conjures like a novelist, and writes like an artist at the height of his powers—which, in fact, he is." —Tom Bissell, author of Extra Lives: Why Video Games Matter

On January 31, 2012, a twenty-three-year-old student was found dead at his keyboard in an internet café while the video game he had been playing for three days straight continued to flash on the screen in front of him.

Trying to reconstruct what had happened that night, investigative journalist Simon Parkin would discover that there have been numerous other incidents of "death by video game."

And so begins a journey that takes Parkin around the world in search of answers: What is it about video games that inspires such tremendous acts of endurance and obsession? Why do we so thoroughly lose our sense of time and reality within this medium? How in the world can people play them . . . to death?

In Death by Video Game, Parkin examines the medical evidence and talks to the experts to determine what may be happening, and introduces us to the players and game developers at the frontline of virtual extremism: the New York surgeon attempting to break the Donkey Kong world record . . . the Minecraft player three years into an epic journey toward the edge of the game's vast virtual world . . . the German hacker who risked prison to discover the secrets behind Half-Life 2 . . .

Riveting and wildly entertaining, Death by Video Game will change the way we think about our virtual playgrounds as it investigates what it is about them that often proves compelling, comforting, and irresistible to the human mind—except for when it’s not.

Praise For Death by Video Game: Danger, Pleasure, and Obsession on the Virtual Frontline…

“Parkin has a deft sense of the ways that video games appeal to and satiate the longings of the spirit...Death by Video Game offers an excellent sociocultural study of the 21st century’s quintessential art form.” —The Washington Post

“For the past decade or so, Tom Bissell has been widely regarded as the best video game writer, and his essay collection Extra Lives the best book about video games. That was true until Simon Parkin’s Death by Video Game...Brainy enough to appeal to even the deepest gamer, and yet accessible enough for the reader who hasn’t picked up a controller in years.” —GQ

“This country could use a reexamining of the underlying appeal of video games. Simon Parkin’s book does just that, exploring the different aspects (discovery, evil, competition) that come to captivate player-bases so strongly that individuals will neglect their health to the point of death.” —Flavorwire

“Groundbreaking ... his reportage leads to brilliant, fresh insights ... Accomplishing that rare feat of teaching while entertaining, this work ignites a series of debates crucial to the future of video games.” —Library Journal, starred review

“The finest book on video games yet. Simon Parkin thinks like a critic, conjures like a novelist, and writes like an artist at the height of his powers—which, in fact, he is.” —Tom Bissell, author of Extra Lives: Why Video Games Matter

“Simon Parkin is gaming's Jon Ronson, and his book charts the extremes of the medium to try to answer the question why the hell do we all care about video games anyway?” —Kieron Gillen, writer of Iron Man,Uncanny X-Men, and The Wicked + The Divine

“The best book about video games I've read since I wrote one.” —Steven Poole, author of Trigger Happy

“Fascinating . . . Parkin takes seriously the notion that video games, or some aspects of them, might be bad for us. Yet he also takes video games seriously as a source of solace for a grieving parent or spouse, a safe form of indoor play for Iraqi children in Baghdad, and a helpful way, like any other form of fiction, for humanity to avoid staring too directly at our certain deaths.” —Chris Suellentrop

SIMON PARKIN is a journalist whose writing has appeared in NewYorker.com, Harper's Magazine, the Guardian, ESPN, and a number of other publications. Death by Video Game is his first book.
Loading...
or
Not Currently Available for Direct Purchase