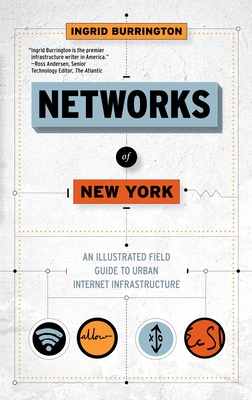 A guided tour of the physical Internet, as seen on, above, and below the city’s streets

It’s the single most essentail aspect of modern life, and yet, for many of us, the Internet looks like an open browser, or the black mirrors of our phones and computers. But in Networks of New York, Ingrid Burrington lifts our eyes from our screens to the streets, showing us that the Internet is everywhere around us, all the time—we just have to know where to look.

Using New York as her point of reference and more than fifty color illustrations as her map, Burrington takes us on a tour of the urban network: She decodes spray-painted sidewalk markings, reveals the history behind cryptic manhole covers, shuffles us past subway cameras and giant carrier hotels, and peppers our journey with background stories about the NYPD's surveillance apparatus, twentieth-century telecommunication monopolies, high frequency trading on Wall Street, and the downtown building that houses the offices of both Google and the FBI's Joint Terrorism Task Force.

From a rising star in the field of tech jounalism, Networks of New York is a smart, funny, and beautifully designed guide to the endlessly fascinating networks of urban Internet infrastructure.

The Internet, Burrington shows us, is hiding in plain sight.

“A playful, approachable handbook...its goal is to demystify components of New York City's physical internet: not only those spray-painted street messages, but also manhole covers, junction boxes, cable routers and entire buildings whose primary purpose is to do the hidden work of making a wired modern city run.” —The Wall Street Journal

“A naturalist style guide to what you can see of New York City’s internet infrastructure...Anybody can see the objects and markings that Burrington points out...but after going through Burrington’s book, they can understand better how they describe the way we keep in touch now.”—The Observer

“A slim, pocket-size volume that an amateur cable-spotter can use to decode the city's secret telecommunications infrastructure.”—New York

“Designed to make the internet tangible...turns the infrastructure into something ordinary and familiar, not intimidating, and not some magical process.”—The Intercept

“Sketches the physical extrusions of the internet into New York City's streets and buildings, [making] especial note of how much of that infrastructure has been built as part of the post 9/11 surveillance network.” —Cory Doctorow, Boing Boing

“A field guide for city dwellers.”—BBC

“[A] delightful guide to the many facets of the internet that are hidden in plain view...Beyond the curiosity, identifying these objects and their relationships to each other is a good frame to use for understanding the complex histories of New York’s communication systems.”—Gizmodo

“Maps the complex world of telecommunications in New York City, revealing hidden pieces of the internet embedded throughout the city’s fabric.”—Atlas Obscura

“Allows you to see the spray paint, manhole covers and other markings that make up the tech network map.”—Metro New York

“A handy little book...that shares some of what Burrington has learned about the physicality of the internet simply by walking through the city and paying attention to what’s going on underground, at the surface, and over our heads.”—Inside Higher Ed

“Like a birdwatcher's guide for IT...[Networks of New York] maps out a world of technology hidden in plain sight.”—Inverse

“Burrington shows us how to read the subtle clues within the urban landscape that reveal the geography of connectedness—and she helps us understand the political and social implications of this infrastructure. I’ll never look at a telecom manhole cover the same way again.” —Lize Mogel, coeditor of An Atlas of Radical Cartography

Ingrid Burrington writes about the Internet, politics, and art, and has been published in The Atlantic, The Nation, ProPublica, San Francisco Art Quarterly, Dissent, and elsewhere. She’s given talks at conferences both in the U.S. and abroad, and her art has been exhibited in galleries in New York, Tokyo, Leipzig, Baltimore, Philadelphia, and many other cities. She lives in Brooklyn, and @lifewinning.
or
Not Currently Available for Direct Purchase