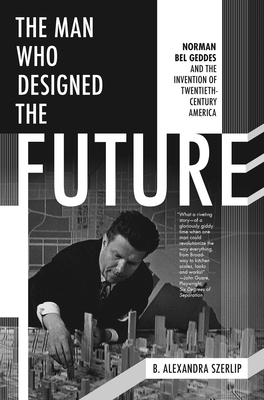 The Man Who Designed the Future

Norman Bel Geddes and the Invention of Twentieth-Century America

Before there was Steve Jobs, there was Norman Bel Geddes.

A ninth-grade dropout who found himself at the center of the worlds of industry, advertising, theater, and even gaming, Bel Geddes designed everything from the first all-weather stadium, to Manhattan's most exclusive nightclub, to Futurama, the prescient 1939 exhibit that envisioned how America would look in the not-too-distant 60s.

In The Man Who Designed the Future, B. Alexandra Szerlip reveals precisely how central Bel Geddes was to the history of American innovation. He presided over a moment in which theater became immersive, function merged with form, and people became consumers. A polymath with humble Midwestern origins, Bel Geddes’ visionary career would launch him into social circles with the Algonquin roundtable members, stars of stage and screen, and titans of industry.

Light on its feet but absolutely authoritative, this first major biography is a must for anyone who wants to know how America came to look the way it did.

Praise For The Man Who Designed the Future: Norman Bel Geddes and the Invention of Twentieth-Century America…

"An exceptional profile [of Norman Bel Geddes]... Szerlip's detailedness and thorough research is evident in this supportive yet fair telling of this complex, controversial genius." —INNOVATION magazine

“In this fascinating and minutely researched biography, Szerlip brings the brilliant, indefatigable industrial designer's imagination to life...A remarkable rediscovery of a man ahead of his time.” —Booklist / American Library Association (starred review)

“Szerlip takes great care to capture the fundamentally theatrical quality of Bel Geddes’s rise, balancing creative license with considerable research in order to produce a narrative that’s fast paced yet rich with detail....A thorough and exciting biography of one of the most imaginative designers of the modern age.” —Library Journal

“Engaging...Szerlip gives full rein to Bel Geddes’s strengths without brushing aside his paradoxes...[He] exited the stage at the high summer of an American future he had envisioned in fine detail long before we lived it.” —Chicago Review of Books

“Set designer, automobile stylist, architect, founding father of American industrial design, inventor of genius, Norman Bel Geddes was volcanically talented and sui generis. In her lively and scrupulously well-researched biography, B. Alexandra Szerlip gives him a deserved place as a key visionary of modernity.” —Nikil Saval, author of Cubed: A Secret History of the Workplace

“What a riveting story—of a gloriously giddy time when one man could revolutionize the way everything, from Broadway to kitchen scales, looks and works!  Is being forgotten one of the ironic penalties of being an American visionary?  Once you've succeeded in giving the future reality, the present no longer needs you. Thank you, Ms. Szerlip, for the vivacious restoration!” —John Guare, Playwright, Six Degrees of Separation

“I learned a lot about Norman Bel Geddes from B. Alexandra Szerlip's book. He was a complex, controversial genius, worthy of this biography. His visionary design of GM's Futurama exhibit for the 1939 NY World's Fair revolutionized people's thinking about the future.” —Don Norman, bestselling author of The Design of Everyday Things, and Director, DesignLab, UC San Diego

“A sympathetic portrait of a guy with such an appetite for creation...Put him on the list with Da Vinci, Verne, Disney and Steve Jobs—he’s somewhere in between all of them.”—The Last Bookstore Blog

"The Man Who Designed the Future is a meticulously researched account of Norman Bel Geddes, an ocean-going huckster of genius, until now largely forgotten." —THE SPECTATOR

B. ALEXANDRA SZERLIP was a two-time National Endowment for the Arts Writing Fellow, a Yaddo fellow, and runner-up for London's Lothian Prize for a first biography-in-progress. She has contributed to The Paris Review Daily and The Believer, among other publications, and has worked in professional theater, as a book editor, sculptor and graphic designer. Raised on the East Coast, she lives in San Francisco.
Loading...
or
Not Currently Available for Direct Purchase