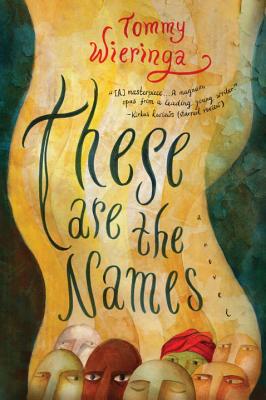 These Are the Names

A moody, atmospheric literary thriller and “a timeless tale of migration” (The Guardian), from one of Europe’s biggest-selling authors

Despite its Biblical title—which comes from the opening lines of the Book of Exodus—award-winning novelist Tommy Wieringa has crafted perhaps his most timely book yet, as he traces two stories doomed to collide.
In one, we follow a group of starving, near-feral Eurasian refugees on a harrowing quest for survival; in the other, we follow Pontus Beg, a policeman from a small border town on the steppe, as he investigates the death of a rabbi, one of the town’s two remaining Jews.
What follows is a gripping saga in which the two stories race toward each other, and Beg will be shaken to his core by what each one reveals about man’s dark nature, and the possibility—or impossibility—of his own redemption. A virtual parable for our times, These Are the Names offers a suspenseful reading of a crisis that continues to dominate headlines, and simultaneously explores the enduring questions of faith, identity, and what it means to be “home.”

Praise For These Are the Names…

“A quasi-mythic novel...[These Are the Names] possesses a symbolic sweep that recalls J.M. Coetzee's Waiting for the Barbarians...Wieringa reminds us that the refugees' desire to find a safe, nurturing place to call home doesn't make them unspeakably alien. It makes them just like us.”—John Powers, NPR's Fresh Air

“A haunting tale about migration, about faith, and about new beginnings.”—Alex Kotlowitz

“A quiet masterpiece. Combines the primal, raw, archetypal vision of José Saramago with the apocalyptic sweep of Cormac McCarthy...Wieringa's prose is lucid as cut glass, his images stark, his landscape desolate and otherworldly at the same time that it is contemporary. His unalloyed depiction of emigration will reverberate keenly in a Europe facing ever growing numbers of exiles, evacuees, escapees of war. It will reverberate, as well, in a United States muddled by its own border policies...A magnum opus from a leading young writer takes on the meaning of exile, identity, faith, and the limits of endurance.” —Kirkus (starred)

“Masterful (and eerie) storytelling. These Are the Names balances the mundane and the mysterious between two seemingly inharmonious stories—the famine-swept journey of a pack of wanderers trekking thought the Eurasian wilderness and a solitary policeman's investigation into the death of a rabbi—without ever striking a discordant note.” —Jewish Book Council

"This probing novel from one of the Netherlands' best-selling authors tackles head-on the knotted complex of issues surrounding the resettlement of refugees...Wieringa's prose is lyrical...He executes his story with great poise and, above all, an unmistakable sense of humanity."—World Literature Today

“Wieringa’s novel offers two searing portrayals of transformation on the unforgiving Eurasian Steppe...Biblical symbolism and themes of wandering, suffering, and redemption pervade the novel. There are echoes of John Steinbeck’s intrepid dust bowl survivors, the voyeuristic allure of Franz Kafka’s 'The Hunger Artist,' and the quiet nihilism and documentary detail of British novelist Jim Crace. Wieringa...strips lives bare and drills to their essence.”—Publishers Weekly (starred)

“Mixes a crime investigation with a probe into humanity's nature.”—Booklist/American Library Association

“The novel’s brilliance is in its juxtaposition of the two storylines...Both brutal and redemptive.”—The Christian Century

“Highly intelligent. Wieringa will make you think and keep you reading eagerly to the final page.” —Claire Lowdon, The Times Literary Supplement

“There are echoes of the great J. M. Coetzee’s elegant irony . . . It is the prose and Wieringa’s relaxed style that make this novel so good . . . A bravura performance. Far closer to Joseph Conrad than one might expect.” —Eileen Battersby, The Irish Times

“An astonishing book . . . It speaks to the mood of our times. It is a novel about violence and barbarism, the fragility of civilization and a world of people on the move, migrants desperate for a better life.” —David Herman, The Jewish Chronicle

Tommy Wieringa is one of the bestselling authors in Dutch history. His novels include Little Caesar and Joe Speedboat, which was shortlisted for the 2013 International IMPAC Dublin Literary Award.