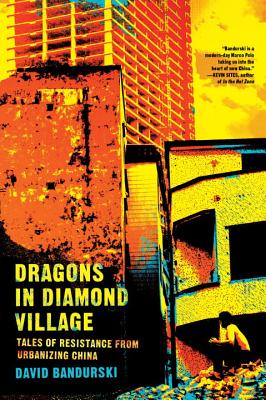 Tales of Resistance from Urbanizing China

“David Bandurski is a modern-day Marco Polo taking us into the heart of new China.” —Kevin Sites, author of In the Hot Zone

Dragons in Diamond Village is about the plight—and the courage—of the village-dwellers caught in this tide of urbanization: Huang Minpeng, a semi-literate farmer turned self-taught rights defender; He Jieling, a suburban housewife who just wanted to open a hair salon; and villagers like Lu Zhaohui who refuse to give up the land their families have cultivated for generations.

It is, in short, a stirring tale -- a community of unlikely activists, they are fighting for identity, justice, and their rightful place in China’s new cities. Behind them stand millions of others who exist in the strange limbo of the urban village. Because their villages stand on invaluable tracts of land—vulnerable to the machinations of corrupt local officials—their homes have become a battleground in the war over China's urban future.

David Bandurski is an award-winning journalist whose work has appeared in The New York Times, The Wall Street Journal, Far Eastern Economic Review, The South China Morning Post and other publications. He received a Human Rights Press Award in 2008 for his investigation into internet censorship in China. Currently an analyst and editor at the China Media Project at the University of Hong Kong, he also produces Chinese independent films and documentaries through his production company, Lantern Films. He lives in Hong Kong.

Praise For Dragons in Diamond Village: Tales of Resistance from Urbanizing China…

"Mesmerizing...a riveting account of a civil society struggling to be born, with deep insights into a culture we too often read as an impossibly monolithic juggernaut." —Architectural Record

"An important book of social reportage in the traditions of Liu Binyan and Studs Terkel.” —Susan Shirk, author of China: Fragile Superpower and former Deputy Assistant Secretary of State during the Clinton administration

"Bandurski combines his deep knowledge of China’s history and culture with graceful writing to produce a thoroughly enjoyable book, and an important one for understanding the tension at the heart of China’s breakneck pace of change.” —Keith B. Richburg, author of Out Of America: A Black Man Confronts Africa

"David Bandurski is a modern-day Marco Polo taking us into the heart of new China.” —Kevin Sites, author of In the Hot Zone

"By following the villagers of Xian and similar communities in Guangzhou, Bandurski has been able to write an unusually thorough and readable book about how exactly China’s cities have grown... The layers of government interests and the thugs at officials’ command provide the punch for Dragons in Diamond Village. But Bandurski draws beauty from the Xian villagers’ fight to survive as a community." —Financial Times
or
Not Currently Available for Direct Purchase
Copyright © 2020 American Booksellers Association