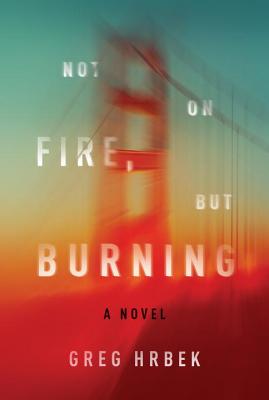 Not on Fire, but Burning (Paperback)

Twenty-year-old Skyler saw the incident out her window: Some sort of metallic object hovering over the Golden Gate Bridge just before it collapsed and a mushroom cloud lifted above the city. Like everyone, she ran, but she couldn't outrun the radiation, with her last thoughts being of her beloved baby brother, Dorian, safe in her distant family home.

Flash forward to a post-incident America, where the country has been broken up into territories and Muslims have been herded onto the old Indian reservations in the west, even though no one has determined who set off the explosion that destroyed San Francisco. Twelve-year old Dorian dreams about killing Muslims and about his sister—even though Dorian's parents insist Skyler never existed. Are they still shell-shocked, trying to put the past behind them . . . or is something more sinister going on?

Meanwhile, across the street, Dorian's neighbor adopts a Muslim orphan from the territories. It will set off a series of increasingly terrifying incidents that will lead to either tragedy or redemption for Dorian, as he struggles to prove that his sister existed—and was killed by a terrorist attack.

Not on Fire, but Burning is unlike anything you're read before—not exactly a thriller, not exactly sci-fi, not exactly speculative fiction, but rather a brilliant and absorbing adventure into the dark heart of an America that seems ripped from the headlines. But just as powerfully, it presents a captivating hero: A young boy driven by love to seek the truth, even if it means his deepest beliefs are wrong.

GREG HRBEK won the James Jones First Novel award for his book The Hindenberg Crashes Nightly. His short fiction has appeared in Harper's Magazine and numerous literary journals, and in The Best American Short Stories anthology. He is writer in residence at Skidmore College.

Praise For Not on Fire, but Burning: A Novel…

“Hrbek's prose is sharp and trenchant, his voice remarkably complex yet assured, and this novel is an impressive achievement: a narrative that is changing even as it is still taking place, still being reshaped by the news, by our collective and individual memories, and by the very consequences still unfolding from the event itself."
—The New York Times

“Masterful … A strong, suspenseful novel, rich in its language, clear eyed in its characters and propulsive in its plotting. Full of ambiguity, yet precise in its construction, “Not on Fire, But Burning” is a shining example of post-9/11, pre-next-disaster storytelling."
—The San Francisco Chronicle

“With Not on Fire, but Burning, Hrbek has crafted something audacious: A novel that operates simultaneously as apocalyptic alarmism, brain-bending quantum fiction, character-driven drama and gripping mystery. It's as poignant as it is perplexing and profound."
—NPR

“It is impossible to read Greg Hrbek's brand new speculative fiction at this moment in time without thinking about all the Facebook posts in your feed about Paris, terrorism and Muslims. Not on Fire, But Burning is simultaneously a dark look at our possible near future and a hopeful one.  The book had me in tears by the end.”
—CBC News

“Not on Fire, but Burning reads like a fever dream — spectacular, seductive, eerie, and surreal…Hrbek’s prose is hypnotic, his abrupt POV pivots are both dizzying and delightful, and his overarching meta-speculative style is utterly entrancing. Fans of Delillo, Atwood, or just great, innovative fiction, this one’s for you.”
—Buzzfeed, 5 Great Books to Read in October

“Brilliantly uncanny and read-it-under-your-desk-at-work suspenseful… You can approach the book as an allegory for the long-term aftermath of 9/11, or as a good, creepy read—it holds up beautifully on both fronts."
—GQ, 7 New Books to Celebrate the Arrival of Reading Season

“Gripping and unnerving, Not on Fire, but Burning is a brilliant critique on the prejudices and fears of the post-9/11 world."
—BuzzFeed, 19 Awesome New Books You Need To Read This Fall

“As [Hrbek's] characters uneasily navigate each other and their new world, they grapple with the same issues and prejudices of our current post-9/11 instability."
—KQED, 10 Fall Books to Anticipate

“Hrbek beautifully depicts the very human longing for a better reality. In analyzing the burning angst and strife within a single human decision, Hrbek highlights the responsibility of emotion and thought in determining those decisions. We only have our very future dangling over the fire."
—PopMatters

“Like the best speculative fiction, [Hrbek's] 2038 America could serve as a warped reflection of our own time, probing post-9/11 anxieties."
—Omaha World-Herald, 8 Must-Read Books

“Not On Fire, but Burning is a mystery, a thriller, a sharp critique of contemporary culture, and an explosive family drama all in one. Hrbek gives us that greatest of literary gifts: the inability to do anything but keep turning pages.”
—Ron Currie, Jr., author of Everything Mattters

“Hrbek…may be poised to be the next indie breakout."
—The Millions, Most Anticipated Books of 2015

“[Hrbek's] engagement with themes of loss and recovery and his vibrantly lyrical prose style reach a peak in this dark, allusive fantasy, which seems intended as a metaphor for the anxieties still lurking in our post-9/11 universe."
—Kirkus Reviews, starred review

“Hrbek delivers a captivating story filled with nuance. Every chapter brings a surprise, and Hrbek has real knack for stunning, unforgettable images and turns of phrase. Not on Fire, But Burning boldly questions America’s moral standing since 9/11, and brings to life the horrific consequences of ignorance, fear and hate."
—Bookpage

Praise for The Hindenburg Crashes Nightly

“Provocative . . . Hrbek writes with an appealing lyricism, and he knows how to deliver a bravura scene.”
—The New York Times Book Review