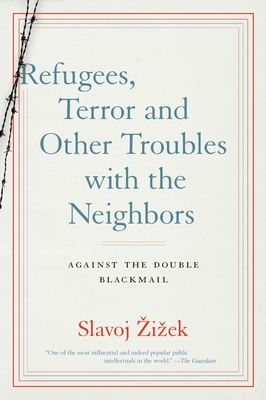 Refugees, Terror and Other Troubles with the Neighbors

Against the Double Blackmail

Popular philosopher and leftist rabble-rouser Slavoj Zizek looks at one of the most desperate situations of our time: the current refugee crisis overwhelming Europe

In this short yet stirring book, Slavoj Zizek—called “the Elvis of cultural history” by The New York Times—argues that accepting all comers or blocking all entry are both untenable solutions . . . But there is a third option.

Today, hundreds of thousands of people, desperate to escape war, violence and poverty, are crossing the Mediterranean to seek refuge in Europe. Our response, from our protected Western European standpoint, argues Slavoj Zizek, offers two versions of ideological blackmail: either we open our doors as widely as possible; or we try to pull up the drawbridge. Both solutions are bad, states Zizek. They merely prolong the problem, rather than tackling it.

The refugee crisis also presents an opportunity, a unique chance for Europe to redefine itself: but, if we are to do so, we have to start raising unpleasant and difficult questions. We must also acknowledge that large migrations are our future: only then can we commit to a carefully prepared process of change, one founded not on a community that see the excluded as a threat, but one that takes as its basis the shared substance of our social being.

The only way, in other words, to get to the heart of one of the greatest issues confronting Europe today is to insist on the global solidarity of the exploited and oppressed. Maybe such solidarity is a utopia. But, warns Zizek, if we don't engage in it, then we are really lost. And we will deserve to be lost.

Praise For Refugees, Terror and Other Troubles with the Neighbors: Against the Double Blackmail…

"[A]n urgent and entertaining diagnosis of the ongoing refugee crisis and global terror threat, highlighting the glaring contradictions in our attitudes and actions." —Mother Jones

"Offers...deep insights into addressing the refugee crisis, one of the world’s most current, serious dilemmas...A thought-provoking, stirring read by a rabble-rouser who deserves serious attention."—The Washington Missourian

"One of the most influential and indeed popular public intellectuals in the world." —The Guardian

"The Elvis of cultural theory." —The New York Times

"The most dangerous philosopher in the West." —The New Republic

"The master of the counterintuitive observation." —The New Yorker

"Few thinkers illustrate the contradictions of contemporary capitalism better than Slavoj Zizek ... One of the world's best known public intellectuals." —The New York Review of Books

Slavoj Žižek is a Hegelian philosopher, Lacanian psychoanalyst, and political activist. He is international director of the Birkbeck Institute for the Humanities, and Global Distinguished Professor of German at New York University. He is the author of numerous books on dialectical materialism, critique of ideology and art, including Event, and Trouble In Paradise, both published by Melville House.
Loading...
or
Not Currently Available for Direct Purchase