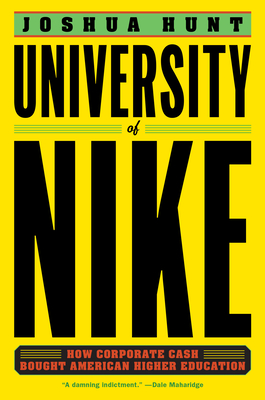 The dramatic expose of how the University of Oregon sold its soul to Nike, and what that means for the future of our public institutions and our society.

**A New York Post Best Book of the Year**

In the mid-1990s, facing severe cuts to its public funding, the University of Oregon—like so many colleges across the country—was desperate for cash. Luckily, the Oregon Ducks’ 1995 Rose Bowl berth caught the attention of the school’s wealthiest alumnus: Nike founder Phil Knight, who was seeking new marketing angles at the collegiate level. And so the University of Nike was born: Knight has so far donated more than half a billion dollars to the school in exchange for high-visibility branding opportunities.

But as journalist Joshua Hunt shows in University of Nike, Oregon has paid dearly for the veneer of financial prosperity and athletic success that has come with this brand partnering.

Hunt uncovers efforts to conceal university records, buried sexual assault allegations against university athletes, and cases of corporate overreach into academics and campus life—all revealing a university being run like a business, with America’s favorite “Shoe Dog” calling the shots. Nike money has shaped everything from Pac-10 television deals to the way the game is played, from the landscape of the campus to the type of student the university hopes to attract.

More alarming still, Hunt finds other schools taking a page from Oregon’s playbook. Never before have our public institutions for research and higher learning been so thoroughly and openly under the sway of private interests, and never before has the blueprint for funding American higher education been more fraught with ethical, legal, and academic dilemmas.

Encompassing more than just sports and the academy, University of Nike is a riveting story of our times.

“Remarkable… [a] page-turner… [that] reads as suspenseful as a late drive in the fourth quarter to win a championship."—LARB

“An eye-opening account about how the University of Oregon had sold its soul to Nike and how it affects higher education and college athletics in general.”—KENTUCKY FORWARD

"Providing fascinating and alarming insight into how other public universities have emulated similar practices in obtaining endorsement deals and partnerships at the expense of their values, this is for readers of sports journalism and true stories of corporate America." —BOOKLIST REVIEWS

"In this fascinating, candid tale, Hunt exposes Nike’s astonishing transformation of the University of Oregon into a modern American university — in other words, a power center of education, wealth, and college football unlike other institutions of learning across the globe.” —Vanessa Grigoriadis, author of Blurred Lines: Rethinking Sex, Power, and Consent

"In this illuminating case study Joshua Hunt connects the dots between endorsement deals and campus sexual assault. University of Nike is a must read for anyone worried about the higher-education industrial complex, which should be all of us." —Malcolm Harris, author of Kids These Days

“A page-turning work of investigative reporting. Much of it details the perfidy of Nike and its founder Phil Knight. But, as the title suggests, this book is also about the damage that America's tax-cutting mania and contempt for government has done to its public, land-grant universities . . . As Hunt shows, by starving institutions like the University of Oregon of resources, an unholy alliance of right-wingers and market-worshipping neoliberals has pushed colleges into the hands of corporate puppeteers like Nike. You need to read this compelling and disturbing book.” —Samuel G. Freedman, author of Breaking The Line

“Through diligent and deep-dive reporting, Hunt reveals how the University of Oregon sold its soul to a corporation. University of Nike is a damning indictment—it should be read by anyone who still believes in the privatization of public institutions. This book is proof that it’s a bad idea when universities become shills for billionaires.” —Dale Maharidge, co-author of the Pulitzer Prize-winning And Their Children After Them

“Joshua Hunt has weaved an amazing tale of power, greed and deceit. This should be a textbook for anyone who wants to learn the truth about what's happening to public universities throughout the country.” —Andy Boyle, author of Adulthood for Beginners

Joshua Hunt is a former foreign correspondent for Reuters in Tokyo. His work has also appeared in the New Yorker, The New York Times, Bloomberg Businessweek, The California Sunday Magazine, and The Atavist Magazine. He is a graduate of the Columbia University Graduate School of Journalism, where he was a fellow at the Toni Stabile Center for Investigative Journalism and a recipient of the Lynton Fellowship in Book Writing.
Loading...
or
Not Currently Available for Direct Purchase