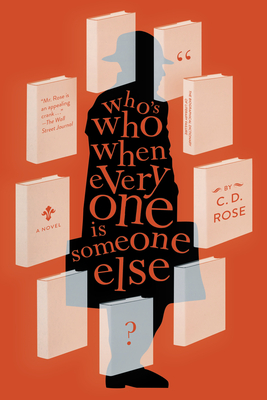 Who's Who When Everyone is Someone Else

Fleeing heartbreak, an unnamed author goes to an unnamed city to give a series of lectures at an unnamed university about forgotten books ... only to find himself involved in a mystery when the professor who invited him is no where to be found, and no one seems quite sure why he's there....

So begins this Wes Anderson-like novel hilariously spoofing modernist literature even as it tells a stirring -- and eerily suspenseful -- story about someone desperate to prove the redeeming power of reading -- and writing -- books.

And as the narrator gives his lectures, attends vague functions where no one speaks English, never quite meets his host professor and wonders the city looking for the grave of his literary hero, the reader begins to suspect this man's relentless faith in literature may be the only thing getting him through the mystery enveloping him.

Praise For Who's Who When Everyone is Someone Else…

"This ingenious, uproarious novel deserves to sit on any bibliophile's shelf."—Times Literary Supplement

"A riotous, triumphant rattlebag of a novel. C.D.Rose has created an intricate exploration of literary intrigue, suspense and levity — lose yourself in this book at once, and savour every moment"—Eley Williams, author of Attrib. & Other Stories

“Anyone who’s been looking for the same hit to the cerebral cortex produced when they first encountered Calvino and Borges will read this extraordinary novel, as I did, with a grateful sense of urgency. It quenches a thirst you almost forgot you had: endlessly inventive, wickedly intelligent, funny and melancholic. I don’t remember the last time I read something this clever, puzzling and intricate which simultaneously packs so much soul. Who’s Who When Everyone is Someone Else is so much more than a sequence of bravura exercises in style; the passages between the lectures have the tone and elegance of a forgotten masterpiece themselves. It puts us outside ourselves, beside ourselves, as readers, as critics, as writers: a total perspective vortex which reminds us, even as it upends our expectations, why we fell in love with reading in the first place.” —Luke Kennard, author of The Transition


"Rose's invented canon is delightful: and this ingenious, uproarious novel deserves to sit on any bibliophile's shelves."—Times Literary Supplement

C. D. ROSE is the author of the satirical book The Biographical Dictionary of Literary Failure (Melville House) and is an award-wining short story writer. He currently teaches at the University of East Anglia, where he also earned an MFA in writing.
Loading...
or
Not Currently Available for Direct Purchase