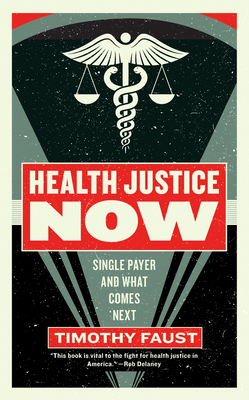 Single Payer and What Comes Next

"The best concise explanation of why the United States needs single-payer health care — and needs to widen the definition of health care itself."— The Washington Post

Single payer healthcare is not complicated: the government pays for all care for all people. It’s cheaper than our current model, and most Americans (and their doctors) already want it. So what’s the deal with our current healthcare system, and why don’t we have something better?

In Health Justice Now, Timothy Faust explains what single payer is, why we don’t yet have it, and how it can be won. He identifies the actors that have misled us for profit and political gain, dispels the myth that healthcare needs to be personally expensive, shows how we can smoothly transition to a new model, and reveals the slate of humane and progressive reforms that we can only achieve with single payer as the springboard.

In this impassioned playbook, Faust inspires us to believe in a world where we could leave our job without losing healthcare for ourselves and our kids; where affordable housing is healthcare; and where social justice links arm-in-arm with health justice for us all.

Praise For Health Justice Now: Single Payer and What Comes Next…

"There is perhaps no better time for Faust's Health Justice Now. Equal parts unapologetic manifesto, grassroots call‐to‐action, and lament over health‐care
profiteering, Health Justice Now peels back the layers of our 'big, stupid profit‐driven multi‐payer Rube Goldberg machine of American healthcare' ...  Faust's ability to toe the line between inundating the reader with legalese and providing a clear, engaging explanation of health‐care policy is impressive." —Peter Rentzepis

"Through coarse language and
dry humor, Faust entertains while revealing the dark, punitive, and exploitative
core of the American health‐care system in a way that will speak to anyone who has
ever felt overwhelmed by their health‐care costs." —Peter Rentzepis

"This book is vital to the fight for health justice in America. As upsetting as much of this book is to read, it soothed me and made me feel less insane and alone in my own efforts to spread the gospel of single-payer, free-at-point-of-use health care. I want to get it in front of every lawmaker, and more importantly in front of every grassroots organizer, as they—we—are the people who will make health justice a reality.” —Rob Delaney, co-writer and co-star of Catastrophe

"As our president recently learned, healthcare is complicated, so there's this misconception that the solutions must be complicated too, and the only way to talk about them is in complex wonkspeak. They aren't, and it isn't. It's about time someone like Timothy Faust, who is every bit as smart as any lanyard-wearing think tanker, lay it out in terms you and me and everyone else tired of getting robbed when they pay their premiums every month can understand." —Dan Riffle, Senior Policy Advisor to Alexandria Ocasio-Cortez

"This book is a searing indictment of the injustices and dysfunctions of the American healthcare system, but it is much more than that.  It illuminates, lucidly and painfully, how our healthcare system works—or, more often, fails to work.  And it describes how we can move forward to a better future, where healthcare is a social right, not a market commodity.  Health Justice Now should be read by everyone trying to understand our healthcare system, and by everyone fighting to remake it."—Dr. Adam Gaffney, President of Physicians For A National Healthcare Program

"Faust [is] the perfect conduit for this message. . . . An impassioned call to action for anyone who has been sick, who has felt the pain of poor medical care, or who knows the crippling bureaucracy of the insurance industry. Which is to say, it’s a call to action for us all."—Houston Chronicle

Timothy Faust’s writing has appeared in Splinter, Jacobin, and Vice, among others. He has worked as a data scientist in the healthcare industry, before which he enrolled people in ACA programs in Florida, Georgia, and Texas, where he saw both the shortcomings of the ACA and the consequences of the Medicaid gap firsthand. Since 2017, he’s been driving around the United States in his 2002 Honda CR-V talking to people about health inequity in their neighborhoods. He lives in Brooklyn.
Loading...
or support indie stores by buying on