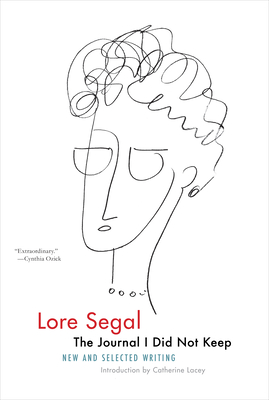 The Journal I Did Not Keep

"For almost six decades Segal has quietly produced some of the best fiction and essays in American literature, as this generous sampler attests."—The New York Times

"Segal is a monumental writer, one of the finest of her generation; this lovely collection is a fine introduction to her work."—Kirkus Reviews

From the award-winning New Yorker writer comes this essential volume spanning almost six decades. Admired for “a voice unlike any other” (Cynthia Ozick) and a style both “wry and poignant” (The New Yorker), Lore Segal is a master literary stylist.

This volume collects some of her finest work—including new and uncollected writing—and selections from her novels, stories, and essays.

From her very first story—which appeared in The New Yorker in 1961—to today, Segal’s voice has been unique in contemporary American literature: Hilarious and urbane, heartbreaking and profound, keen and utterly unsentimental.

Segal has often used her own biography as both subject and inspiration: At age ten she was sent on the Kindertransport from Vienna to England to escape the Nazi invasion of Austria; grew up among English foster families; and eventually made her way to the United States. This experience was the impetus for her first novel, Other People’s Houses, and one that she has revisited throughout her career.
From that beginning, Segal’s writing has ranged widely across form as well as subject matter. Her flawless prose and light touch belie the rigor and intelligence she brings to her art—qualities that were not missed by the New York Times reviewer who pointedly observed, “though it was not written by a man . . . Segal may have come closer than anyone to writing The Great American Novel.”


With this volume comes a long-awaited career retrospective of an important American Writer.

Praise For The Journal I Did Not Keep: New and Selected Writing…

"For almost six decades Segal has quietly produced some of the best fiction and essays in American literature, as this generous sampler attests."—The New York Times

"An eclectic, covertly joyful book, [that] shares with the rest of Segal’s writing an openhearted curiosity toward life, even at its ugliest moments."—HARPER'S MAGAZINE

"Clear, precise and devastating... a satisfying grasp for continuity by a woman who has continuously experienced profound loss."—VANITY FAIR

"Lore Segal is a national treasure, brilliant, unsentimental, and wry; this volume, introduced by Catherine Lacey, is a massive and delightful compendium of six decades of her work, including uncollected writings, essays, and excerpts from novels and stories."—LIT HUB

"Segal is a monumental writer, one of the finest of her generation; this lovely collection is a fine introduction to her work."—Kirkus  [STARRED REVIEW]


"Segal remains one of the most distinct voices of the 20th-century American literary tradition. Consistently perceptive with a wry humor lurking just beneath the surface. The Journal I Did Not Keep is a joy to read."—Shelf Awareness

“No one writes like Segal—her glittering intelligence, her piercing wit, and her dazzling insights into manners and mores, are a profound pleasure.” —Margot Livesey

“I always feel in her work such a sense of toughness and humor . . . Her writing is sad and funny, and that makes it more of both.” —Jennifer Egan

“If America had anything resembling a wise elder, or cared to, it would be Lore Segal.” —Shalom Auslander

“This woman is one of the best writers I’ve ever had the privilege of reading.” —Ayelet Waldman

“Lore Segal is a marvelous and fearless writer. No subject is too hard, too absurd, or too painful for her wise, peculiar, and brilliant fiction.” —Lily Tuck

LORE SEGAL is the author of the Pulitzer Prize finalist Shakespeare's Kitchen, as well as the novels Half the Kingdom, Lucinella, Other People's Houses and Her First American. She is the recipient of the American Academy and the Institutes of Arts and Letters Award, a Guggenheim Fellowship, The O'Henry Prize and the Harold U. Ribalow Prize. She has written for The New Yorker, The New York Times, Harper's Magazine, The New Republic, and numerous other publications. She has also written children's books and translates from the German. Segal lives and works in New York City.

CATHERINE LACEY is author of the novels Nobody is Ever Missing and The Answers, and most recently, the short story collection Certain American States.
Loading...
or support indie stores by buying on