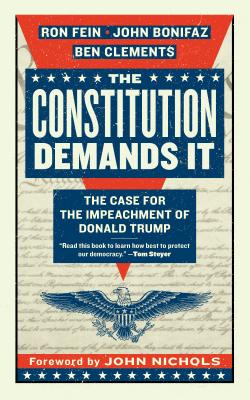 The Constitution Demands It

The Case for the Impeachment of Donald Trump

"Read this book and learn how best to protect our democracy." --Tom Steyer, founder of Need To Impeach

Three veteran constitutional attorneys say there’s no way around it: The Constitution demands that Donald Trump must be impeached.

Citing charges such as accepting illegal payments from foreign governments, using government agencies to persecute political enemies, obstructing justice, abusing the pardon power, and the undermining freedom of the press, they provide the factual and legal basis for eight articles of impeachment.

In short, they argue, abuses threatening our constitutional democracy should be dealt with by the remedy that the Constitution provides for a lawless, authoritarian president: impeachment. And an informed citizenry should be part of the process.

Praise For The Constitution Demands It: The Case for the Impeachment of Donald Trump…

"We are in the midst of a constitutional crisis.... If you are troubled about Trump’s lawlessness, I think it is your responsibility as a concerned citizen to read this book and to learn how bestto protect our democracy." —Tom Steyer, founder of Need to Impeach

“Finally, a book about impeachment that lays out the facts about what President Donald Trump has done, the legal and constitutional principles he’s violated, and a clear case for why Congress should start impeachment hearings right away. You can read this book in one sitting and you’ll be ready to answer tired arguments for delay and diversion with the facts and the Constitution."—Alyssa Milano, actress and activist

“Donald J. Trump is probably the most corrupt and inept U.S. president in modern history. He has violated the Constitution and this Nation's laws with impunity.  His impeachable offenses are legion and are expertly detailed in this book. It is a must-read for every voter and citizen interested in good government."—James C. Nelson, Montana Supreme Court Justice (ret.)

“In a time when so much of political discourse has degenerated to tweets and Nazi slogans, it's a relief to see a straightforward, coherent and compelling delineation of the case for impeachment. The only way to return our country to a semblance of normalcy is to impeach the kleptocrat-in-chief, and this book is exactly the guide we need to show us how.” ­—Ayelet Waldman, novelist and former public defender

“The founding fathers provided us with an effective tool to combat the excesses of the current administration. This book lays out the legal framework for impeachment ...The country you save may be your own.”—Eva Paterson, veteran civil rights attorney

“That we are debating the impeachability of Donald Trump at all is a sign of the towering insanity of our age. We are lucky to have Ron Fein, John Bonifaz, and Ben Clements to show us the undeniable grounds for impeachment — perhaps the only way to demonstrate that we are a nation of ideals, decency, and laws.”—Dave Eggers, author of The Monk of Mokha and The Circle

Ron Fein, Legal Director for Free Speech For People, is a constitutional lawyer who previously served as Assistant Regional Counsel in the U.S. Environmental Protection Agency, where he received the National Gold Medal for Exceptional Service. He appears regularly on television and in the op-ed pages of The Washington Post, commenting on constitutional matters.

John Bonifaz is the co-Founder and President of Free Speech For People. He previously served as the Executive Director and General Counsel of the National Voting Rights Institute, and as the Legal Director of Voter Action, a national election integrity organization. A distinguished attorney, he has been at the forefront of key voting rights battles across the country for more than two decades, and is a winner of a MacArthur Foundation Fellowship Award.

Ben Clements is the Chair of the Board of Directors of Free Speech For People and Chair of its Legal Committee.  He is also a founding partner of the Boston law firm, Clements & Pineault, LLP. His clients have included the state and federal governments, candidates for state and federal office, senior public officials, large corporations and small businesses. He is a former federal prosecutor and former Chief Legal Counsel to Massachusetts Governor Deval Patrick.

John Nichols (Foreword) is the National Affairs correspondent for The Nation and associate editor of The Capital Times, the daily newspaper in Madison, Wisconsin, as well as a contributing writer for In These Times. He is the author or co-author of numerous books, including The Genius of Impeachment and The Death and Life of American Journalism, and is a regular television commentator on political matters.
Loading...
or
Not Currently Available for Direct Purchase