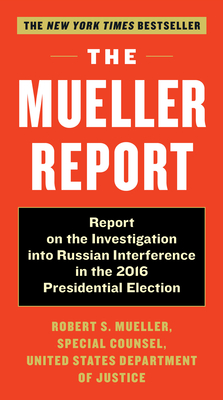 This is the full text, Volumes 1 and 2, of special counsel Robert Mueller's investigation. It is THE REPORT AND NOTHING BUT THE REPORT, in a beautifully typeset edition, with full searchability in ebook formats, presented exactly as released by the Attorney General of the United States, with no positioning—such as a celebrity introduction—that would give it a bias or impede its clarity.

One of the most-talked-about investigations in American history, the subject of constant media discussion and speculation, non-stop and controversial attacks from the president, and the eager anticipation of a public wondering what the truth is, this long-awaited publication is an historic event.

Praise For The Mueller Report: Report on the Investigation into Russian Interference in the 2016 Presidential Election…

"A vindication of the rule of law. Now the public needs to read it." — The New York Times

"The Mueller probe is not just another criminal investigation. It is also an inquiry into a foreign attack on the nation’s democratic system, the details of which are the public’s to know, and an inquest into official malfeasance at some of the highest levels of government." — The Washington Post

“The Mueller probe is the most important investigation in a generation.” — The New York Post

“The only drama that matters.” —BBC

Robert S. Mueller, III was Director of the Federal Bureau of Investigation (FBI) from 2001 to 2013, serving under both Republican president George W. Bush and Democratic president Barack Obama. A decorated combat veteran of the war in Vietnam, and a lifelong civil servant, he was appointed Special Counsel in charge of the investigation of Russian interference in the 2016 presidential election by acting Attorney General Rod J. Rosenstein on May 17th, 2017.
Loading...
or
Not Currently Available for Direct Purchase