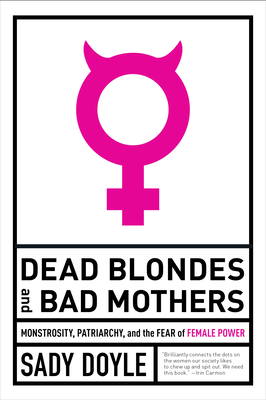 Monstrosity, Patriarchy, and the Fear of Female Power

This “witty, engaging analysis” of female monsters in pop culture offers “provocative and incisive” commentary on society’s fear of female rage and power (Soraya Chemaly, author of Rage Becomes Her)

Women have always been seen as monsters. Men from Aristotle to Freud have insisted that women are freakish creatures, capable of immense destruction.

Maybe they are. And maybe that’s a good thing.

Sady Doyle, hailed as “smart, funny and fearless” by the Boston Globe, takes readers on a tour of the female dark side, from the biblical Lilith to Dracula’s Lucy Westenra, from the T-Rex in Jurassic Park to the teen witches of The Craft. She illuminates the women who have shaped our nightmares: Serial killer Ed Gein’s “domineering” mother Augusta; exorcism casualty Anneliese Michel, who starved herself to death to quell her demons; author Mary Shelley, who dreamed her dead child back to life.

These monsters embody patriarchal fear of women, and illustrate the violence with which men enforce traditionally feminine roles. They also speak to the primal threat of a woman who takes back her power. In a dark and dangerous world, Dead Blondes and Bad Mothers asks women to look to monsters for the ferocity we all need to survive.

“Some people take a scalpel to the heart of media culture; Sady Doyle brings a bone saw, a melon baller, and a machete.” —Andi Zeisler, author of We Were Feminists Once

Praise For Dead Blondes and Bad Mothers: Monstrosity, Patriarchy, and the Fear of Female Power…

“This book is brilliant as it is frightening. A must read for all fans of horror.”
—Tor.com

“Gifted with humor and insight, Doyle writes as if she’s ready to lead a revolution for women who are tired of being underestimated and mistreated by the men who fear them.”
—Bust Magazine

“A triumphant book, one worthy of sitting on the shelf next to—and informing—the many empowering books championing women this year.”
—The Rumpus

“Cutting and composed . . . a study of the ways women throughout history have been depicted as monsters in order to cement their roles in a patriarchal society . . . (A) superinformed, no-nonsense, and even sometimes funny take on female monstrosity.”
—Booklist

“Sady Doyle is an absolutely essential voice in this moment of moral panic. As we continue the battle for gender equality, her writing grounds the fight in a refreshing dose of sanity. I recommend it to anyone interested in remaining sane.”
—Lauren Duca, author of How to Start a Revolution: Young People and the Future of American Politics

“Sady Doyle has created a chimera of a book: simultaneously a crackling great read full of riveting stories, and a damning indictment of how our culture represses what it can't control. It's hard to read, at times, but also necessary and validating, swashbuckling without being careless, powerful and funny and compelling throughout.”
—Emily Gould, author of And the Heart Says Whatever

“Sady Doyle’s provocative and incisive cultural commentary is consistently several steps ahead of mainstream political analysis. What, today, is more important that an examination of our society’s fear of women and power, a topic Doyle has studied down years. Her deep understanding and witty, engaging analysis will make you see the world in a whole new, and important, way.”
—Soraya Chemaly, author of Rage Becomes Her: The Power of Women’s Anger

“From history to pop-culture, Dead Blondes and Bad Mothers lays bare the violence and structured misogyny we don’t want to see. She has ripped the blinders off.”
—Nancy Schwartzman, director of Roll Red Roll and Founder of Circle of 6

“Sady Doyle has redrawn the lines in the cultural sand with Dead Blondes and Bad Mothers. Combining history, folklore, true crime, personal anecdotes and horror films Doyle has written a book that redefines the female experience, emboldening, empowering and expanding it beyond its preconceived confines. Beautifully written, devastatingly funny, and exhaustively researched Dead Blondes and Bad Mothers is a deeply necessary and urgent book.”
—Alexandra West, author of The 1990s Teen Horror Cycle: Final Girls and a New Hollywood Formula

“An eye-opening treatment of an issue that could not be more timely: the pathologization and demonization of women's power.”
—Kate Manne, author of Down Girl: The Logic of Misogyny

“Why are powerful women so scary to us, and what myths keep them that way? A macabre, witty, and often bone-chilling look at the way patriarchy has contained and neutralized women's power throughout the ages by construing it as monstrous, Doyle pulls off her dazzling synthesis in page-turning prose that makes it clear what the real monster is—patriarchy—and leaves us with the hope that by embracing the monstrous within ourselves, we might just slay it.”
—Amy Gentry, author of Good as Gone and Last Woman Standing

“Sady Doyle successfully reframes patriarchy itself. It is not, as we have been told, the natural order of things: where men are fated to lead, absent any consideration to women. Instead, it is a system that was unnaturally constructed in fear of women. And now, as we reach what feels to be the end, the imagined monsters we have always made of women must become the very real monsters that are the only beings capable of breaking the system entirely.”
—Zack Akers, creator of Limetown podcast and TV series

“This book blew me away. Step by inexorable, logical, sure-footed step, Sady Doyle lays bare how patriarchy traps us in the stories it tells about us, and how these stories are a form of violence in themselves. Fueled by rage and spiked, like a nail bomb, with humor, this book feels like the lights coming on suddenly, just in time to see the roaches scatter.”
—Carina Chocano, bestselling author of You Play the Girl: On Playboy Bunnies, Princesses, Trainwrecks and Other Man-Made Women

“Wrested from the sanitized grasp of corporate jargon and cliches, Doyle acquaints readers uneasily with the brutal, corporeal roots of our language and rituals around power: corrupt, degrade, gag, discipline, condemn, expel . . .”
—Alana Massey, author of All The Lives I Want: Essays About My Best Friends Who Happen To Be Famous Strangers

Sady Doyle is the author of Trainwreck: The Women We Love to Hate, Mock, and Fear . . . and Why. Her work has appeared in In These Times, The Guardian, Elle.com, The Atlantic, Slate, Buzzfeed, Rookie, among other publications. She is the founder of the blog Tiger Beatdown, and won the first-ever Women's Media Center Social Media Award. She's been featured in Rookie: Yearbook One and Yearbook Two, and contributed to the Book of Jezebel.
Loading...
or
Not Currently Available for Direct Purchase