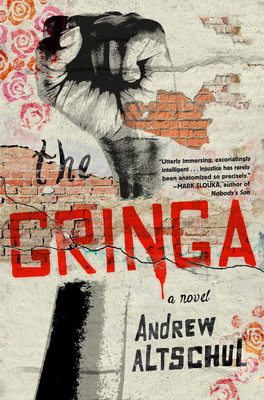 Leonora Gelb came to Peru to make a difference. A passionate and idealistic Stanford grad, she left a life of privilege to fight poverty and oppression, but her beliefs are tested when she falls in with violent revolutionaries. While death squads and informants roam the streets and suspicion festers among the comrades, Leonora plans a decisive act of protest—until her capture in a bloody government raid, and a sham trial that sends her to prison for life.

Ten years later, Andres—a failed novelist turned expat—is asked to write a magazine profile of “La Leo.” As his personal life unravels, he struggles to understand Leonora, to reconstruct her involvement with the militants, and to chronicle Peru’s tragic history. At every turn he’s confronted by violence and suffering, and by the consequences of his American privilege. Is the real Leonora an activist or a terrorist? Cold-eyed conspirator or naïve puppet? And who is he to decide?

In this powerful and timely new novel, Andrew Altschul maps the blurred boundaries between fact and fiction, author and text, resistance and extremism. Part coming-of-age story and part political thriller, The Gringa asks what one person can do in the face of the world’s injustice.

Praise For The Gringa…

"Psychologically rich and closely observed ... A sensitive portrayal of the search for meaning in an unforgiving world." —Kirkus

"The Gringa bites off an impressive chunk of American—and Peruvian—history with dynamic prose. It's an exciting addition to the literature of terrorism and revolution." —KARAN MAHAJAN, author of The Association of Small Bombs

"What every even slightly conscious American writer is trying to figure out right now is how to write about the state of America without clambering atop a soapbox. This is the considerable achievement of Andrew Altschul's The Gringa." —DAVID SHIELDS, author of Reality Hunger

"An extraordinary novel...powerful and provocative, stylish and smart, culturally relevant and emotionally astute." —MOLLY ANTOPOL, author of The Unamericans

Andrew Altschul is the author of the novels Lady Lazarus and Deus Ex Machina. His work has appeared in Esquire, McSweeney’s, Ploughshares, Best New American Voices, Best American Nonrequired Reading, and O. Henry Prize Stories. A former Wallace Stegner Fellow and Jones Lecturer at Stanford University, he was the founding books editor at The Rumpus and is a Contributing Editor at Zyzzyva. He teaches at Colorado State University.
Loading...
or support indie stores by buying on