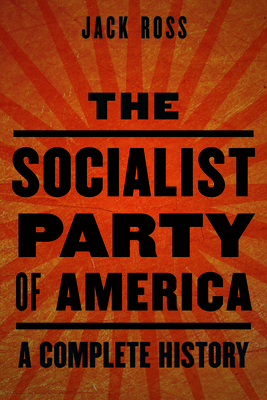 The Socialist Party of America (Hardcover)

At a time when the word “socialist” is but one of numerous political epithets that are generally divorced from the historical context of America’s political history, The Socialist Party of America presents a new, mature understanding of America’s most important minor political party of the twentieth century. From the party’s origins in the labor and populist movements at the end of the nineteenth century, to its heyday with the charismatic Eugene V. Debs, and to its persistence through the Depression and the Second World War under the steady leadership of “America’s conscience,” Norman Thomas, The Socialist Party of America guides readers through the party’s twilight, ultimate demise, and the successor groups that arose following its collapse.

Based on archival research, Jack Ross’s study challenges the orthodoxies of both sides of the historiographical debate as well as assumptions about the Socialist Party in historical memory. Ross similarly covers the related emergence of neoconservatism and other facets of contemporary American politics and assesses some of the more sensational charges from the right about contemporary liberalism and the “radicalism” of Barack Obama.

Jack Ross is a freelance editor and independent historian in Brooklyn, New York. His work has appeared in the American Conservative, Tikkun, the Mitrailleuse, Daily Caller, Mondoweiss, and Antiwar.com. He is the author of Rabbi Outcast: Elmer Berger and American Jewish Anti-Zionism (Potomac, 2011).

Praise For The Socialist Party of America: A Complete History…

“There have been books before on the history of the American Socialist Party, but none that I know of takes the story from the party’s roots in the late nineteenth century through its devolution after World War II into Michael Harrington’s Democratic Socialist Organizing Committee and the proto-conservative Social Democrats USA. Ross tries to answer the difficult question of why the American Socialists never became a major party, providing an important history not only of the American left but of the right as well.”—John B. Judis, senior writer for the National Journal
— John B. Judis

“Jack Ross has performed a prodigious and provocative feat of recovery and historical interpretation. In Ross’s telling, the Socialist Party of America is not just a dreary dress rehearsal for Cold War liberalism or neoconservatism but rather, at its best, a living, breathing embodiment of populist American radicalism.”—Bill Kauffman, author of Ain’t My America: The Long, Noble History of Antiwar Conservatism and Middle-American Anti-Imperialism
— Bill Kauffman

“Not only does Jack Ross cover the history of the [Socialist Party of America] and its leading adherents, he also offers an analysis of socialism’s rise, decline, and persistence as a marginal movement in the United States that is more complete and original than that of any other scholars of the political left. . . . This history deserves the attention and respect of every reader.”—Melvyn Dubofsky, Distinguished Professor Emeritus of history and sociology at Binghamton University, SUNY, and coauthor of John L. Lewis: A Biography
— Melvyn Dubofsky
or
Buy Here
Copyright © 2020 American Booksellers Association